BREAKING: ISIS Leader Abu Bakr al-Baghdadi Believed to Have Been Killed, According to Report 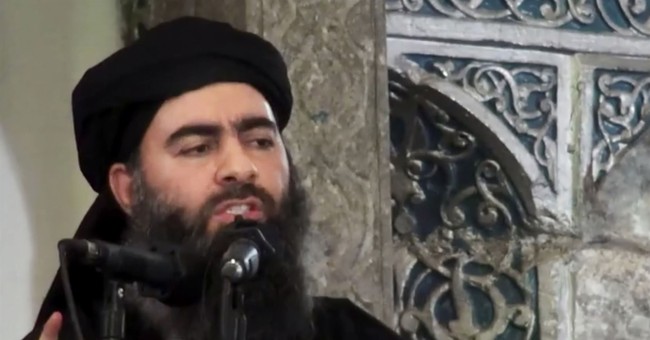 Abu Bakr al-Baghdadi, the leader of the Islamic State of Iraq and Syria (ISIS), is believed to have been killed in a top-secret operation, according to Newsweek.

The United States military has conducted a special operations raid targeting one of its most high-value targets, Abu Bakr al-Baghdadi, the leader of the Islamic State militant group (ISIS), Newsweek has learned. Donald Trump approved the mission nearly a week before it took place.

Amid reports Saturday of U.S. military helicopters over Syria's northwestern Idlib province, a senior Pentagon official familiar with the operation and Army official briefed on the matter told Newsweek that Baghdadi was the target of the top-secret operation in the last bastion of the country's Islamist-dominated opposition, a faction that has clashed with ISIS in recent years. A U.S. Army source briefed on the results of the operation told Newsweek that Baghdadi was killed in the raid. And the Defense Department told the White House they have "high confidence" that the high-value target killed was Baghdadi but further verification is pending."

The president will make a statement on Sunday morning at 9 a.m. eastern time, according to NBC News.

A White House official tells @NBCNews that the president will be making a statement Sunday at 9 a.m. ET.

Before the announcement, President Donald Trump tweeted that "Something very big has just happened!"

Something very big has just happened!

Abu Bakr al-Baghdadi has been the leader of ISIS since June 2014. In that year, ISIS declared itself a worldwide caliphate and claimed authority over the Muslim world, and an international coalition led by the United States targeted ISIS in Iraq and Syria. Russia intervened in Syria against ISIS the following year. In December 2017, it was reported that ISIS had lost 98 percent of the territories it once held.

But the withdraw of U.S. troops from Syria this month led to the release of several captured ISIS fighters. When Turkey took advantage of the opportunity and invaded northern Syria, Kurdish soldiers who were guarding the ISIS prisoners left their post in the ensuing fighting. At least 100 ISIS fighters broke out of a Syrian detention facility after the facility came under attack from followers of al-Baghdadi.

Following the invasion, the Trump administration imposed sanctions on Turkey, forcing a permanent ceasefire between Turkey and Kurdish forces. The sanctions have since been lifted.

The U.S. also announced on Friday that three ISIS fighters were killed in a U.S. airstrike in the Golis Mountains of northern Somalia.

A reward of up to $25 million for information leading to the terrorist's death or capture had previously been offered by the U.S. State Department.