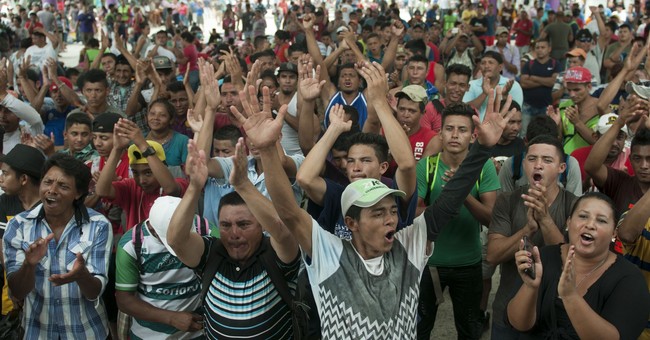 The Trump administration is testing a rapid review program in El Paso to process asylum claims in 10 days or less, The Washington Post is reporting. Currently, it takes anywhere from several months to several years for the government to process requests for asylum.

(Via The Washington Times)

The accelerated reviews seek to accomplish two Trump administration goals: deterring migrants from attempting to cross the U.S. border and pushing asylum seekers out of the United States. El Paso is the only place where the administration is currently testing the program, which started this month, according to U.S. officials.

Migrants apprehended in the El Paso area are taken to a 1,500-bed soft-sided Border Patrol facility that opened in August and remains largely empty because the number of migrants taken into custody has plunged in recent months. They are given one day after arriving to call family or a lawyer, then they have an interview with an asylum officer to determine whether they have a credible fear of persecution if returned to their home country, according to a CBP official who described the program on the condition of anonymity because he was not authorized to speak about it publicly."

Last November, the Trump administration reached a deal with the Mexican government known as the "Remain in Mexico" agreement. The policy requires asylum seekers entering from Mexico to remain in Mexico while their requests for asylum are being processed. Democrats and immigrant-rights groups have criticized the policy because they claim it puts vulnerable populations at risk of violence in Mexico.

In July, the Department of Homeland Security and Department of Justice announced new rules regarding requests for asylum. Under those rules, migrants are barred from claiming asylum when they failed to claim asylum in the first available country they entered. A federal judge in California attempted to block the new rules from taking effect, but the Supreme Court upheld the changes in a September decision.

The Supreme Court also announced last week that it would review the Trump administration's decision to remove migrants without giving them a hearing in federal court. An appeals court in California previously ruled that expedited reviews violated the constitutional rights of asylum seekers.

Like so many of the Trump administration's efforts to deal with immigration and fraud, the rapid review program currently being tested is sure to face challenges from federal judges.