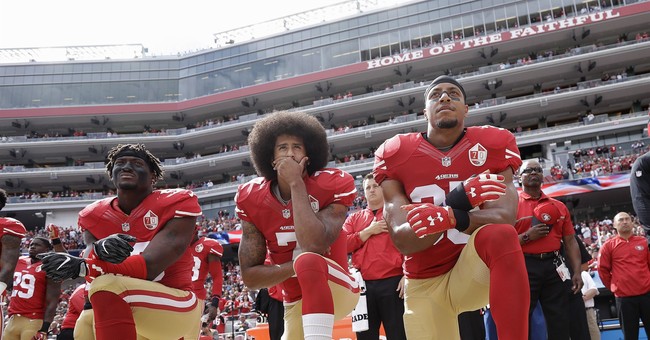 To correct all the “false narratives” regarding Colin Kaepernick, his team put out a factsheet, obtained via TMZ. Kaepernick wants to play football again and isn't happy just selling shoes.

Here are some of the facts purported by the Kaepernick team:

“Has Colin been offered a job by an NFL team? No, not a single team has offered Colin a job since the 2016 season, in which he began his peaceful protest.”

“Have you reached out to every team on Colin’s behalf? I have reached out to all 32 teams about Colin’s employment, with little to no response from teams about an opportunity for Colin. In 25 years, I have never seen anything like it.”

“Does Colin still want to play? Yes, he has been working out 5 days a week, for 3 years, in preparation to play again.”

In the NFL, Kaepernick infamously took a knee anytime he heard the National Anthem. Kaepernick said his protest of our nation’s flag was somehow about racial injustice in the United States -- and in no way a political distraction designed to keep attention away from his poor performance on the field.

The protests of the American Flag by NFL players, started by Kaepernick, helped drive down viewership for the NFL. But Kaepernick’s team just can’t figure out why a single NFL team isn’t itching to give the controversial player a new platform.

And it’s not just athletes that Kaepernick inspired with his protest. A public school teacher in New Jersey repeatedly took a knee during the Pledge of Allegiance in his classroom. In the NFL’s case, viewers could turn off the T.V. But taxpayers continue to pay this activist’s salary. Demonstrating how hard it is to ever fire a public school teacher, the perpetual kneeler has since been reassigned to “alternative duties,” according to reporting by the Daily Journal.

Kaepernick now sells shoes for Nike, which has not been without controversy. But he can’t be surprised that a poor-performing athlete who drove down ratings with his antics isn’t wanted by a single team in the NFL.