Report: Kindergartners Receive Presentation on Transgenderism Without Parents Being Informed 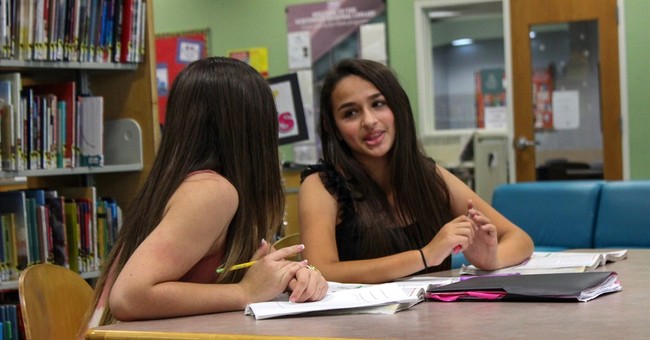 A Virginia elementary school is making headlines for lying about a transgender activist’s presentation to Kindergarten students, which was reportedly delivered without parental permission.

Last month, approximately 50 Kindergartners in an Arlington, Virginia classroom sat on the floor and listened while a transgender spokesperson for the Human Rights Campaign (HRC) read them a story. The book, titled I am Jazz,was authored by transgender teen Jazz Jennings, and states that a child can have a “girl brain but a boy body” or a boy brain and a girl body.

The school later claimed that parents were given the opportunity to opt their children out of the presentation, and that a letter was sent out notifying parents ahead of time about the presentation’s content.

But it now appears that the school’s claim is false.

According to Casey Chalk in The Federalist, the letter that parents received offered no information about opting out, nor did it specify what, exactly, the students would be hearing.

“A copy of the February 22 letter provided to the Family Foundation of Virginia under the Virginia Freedom of Information Act shows absolutely no offer for parents to pull their kids out of the activity,” wrote Chalk. “Moreover, although the letter notes that a book written by a transgender person would be read to the class, it does not explicitly say that kindergarteners will be told they may have a “girl brain but a boy body” or a boy brain and a girl body, as the book claims. Nor does it say that the kids would be read to by a cross-dressing man who calls himself ‘Sarah.’ Rather, it says only that “there will be discussion around the big ideas of the books which are we want to accept and welcome all people.”

A Washington Post report described the presentation in detail. According to The Post, on February 28, Kindergarten classes at Ashlawn Elementary School heard from transgender advocate Sarah McBride, who read them the book I Am Jazz.

The Post also reported that when McBride finished reading the book she told the Kindergartners that, “I’m like Jazz. When I was born, the doctors and my parents, they all thought I was a boy.” Then when a student asked why, McBride replied that “society, people around them told them that was the case. It took me getting a little bit older to be able to say that in my heart and in my mind, I knew I was really a girl.”

Chalk also pointed out that the letter notifying parents was only sent in English, despite a number of different languages spoken by families within the district.

The presentation was organized by the National Education Association and the HRC, which said the reason they chose the book was to teach children to be respectful to transgender classmates.

Greg Gutfeld Savages Libs Who Took His Joke from 'The Five' Way Too Hard
Townhall
WaPo looks at bigger picture to show why the DCCC's gas price graph is so ridiculous
Twitchy
With 'Yes' Votes on a Federal Vaccine Database, 80 Republicans Want to Seal Your Fate—Seal Theirs and Vote Them Out
Redstate
40 Years Ago, Monty Python Predicted (and Mocked) Wokeness
PJ Media