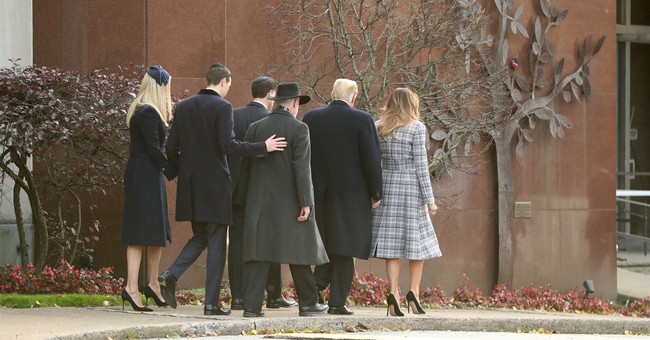 After meeting with President Trump and a few of his family members Tuesday, Tree of Life Synagogue rabbi Jeffrey Myers is speaking openly about the experience.

In an interview with CNN on Thursday, Myers described Tuesday’s encounter with the president.

The rabbi said he was “pleasantly surprised” to discover a “warm and personal side” to President Trump, when he visited the Pittsburgh synagogue earlier this week after the deadly shootings that had occurred there over the weekend.

“I was privileged to have a private 15 or 20 minutes with the family,” Myers recounted. “The president was very warm, very consoling, put his hand on my shoulder, and the first question he asked me was, ‘Rabbi, tell me how are you doing.’ I must say throughout the time we spent together, I was pleasantly surprised by a warm and personal side to the president that I don’t think America has ever seen.”

Tuesday’s visit to the synagogue also included first lady Melania Trump, along with Ivanka Trump and Jared Kushner, the president’s daughter and son-in-law, both of whom are Jewish.

During his short time in Pittsburgh, the president did not appear or speak publicly. Instead, he and his family paid quiet tribute to the 11 victims by laying flowers at the synagogue, and also visited the local hospital where police officers wounded in the shooting are currently recovering.

The president was also greeted by protestors when he arrived at the synagogue.

But Naftali Bennett, the Israeli minister for diaspora affairs, defended President Trump against those critics“using this horrific anti-Semitic act to attack President Trump.”

“This is unfair and wrong,” said Bennett, who hurried to Pittsburgh in the aftermath of the shootings to offer Israel’s support to the city’s Jewish community. “President Trump is a true friend of the state of Israel and to the Jewish people. With President Trump we never have to worry if he has our backs.”

White House press secretary Sarah Sanders told reportersWednesday that Trump found his visit to be “very humbling” and “very sad.” She said he was “incredibly impressed” by Rabbi Myers, who had been conducting services at Tree of Life Synagogue when the shots first rang out.

Aboard Air Force One, Sanders said Tuesday that President Donald Trump had “wanted today to be about showing respect for the families and the friends of the victims as well as for Jewish Americans.”