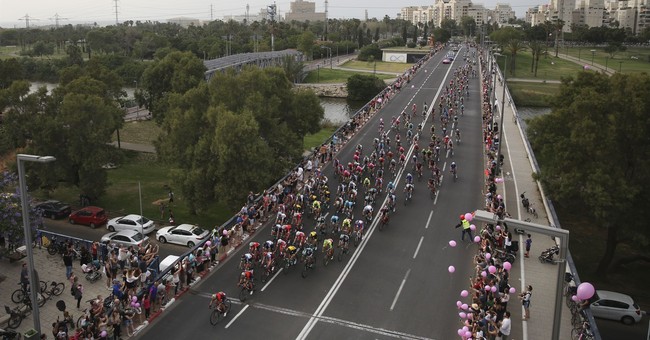 A biological male, identifying as a transgender woman, won a women’s world cycling championship on Sunday.

Now, one of the transgender athlete’s competitors is speaking out and calling the win “unfair.”

The winner, who goes by the name Rachel McKinnon, is a professor at the University of Charleston, and represented Canada in the the recent women’s sprint 35-39 age bracket at the 2018 UCI Masters Track Cycling World Championships, held in Los Angeles.

McKinnon beat out both Carolien Van Herrikhuyzen of the Netherlands and American cyclist Jennifer Wagner to take home the gold medal in the event.

The subject of biological men competing against women remains highly controversial in the cycling world. Back in January, McKinnon told USA Today that biological men should not be required to suppress testosterone in order to compete against women. In the interview, McKinnon also compared the issue of transgender athletes to racial desegregation in American sports.

“I bet a lot of white people were pissed off when we desegregated sports racially and allowed black people. But they had to deal with it,” said McKinnon.

But not all cyclists agree. Bronze medalist Jennifer Wagner is one of them.

The American doctor from Houston, Texas also took to Twitter to express her own views on a man competing in--and winning--the women’s cycling event.

“I was the 3rd place rider. It’s definitely NOT fair,” Wagner tweeted on Monday in a reply to another critical comment about the race.

In another tweet, Wagner addressed the fact that the International Cycling Union (or UCI), the world’s governing body of cycling, permits transgender cyclists to self-select in competition.

“Just because it’s a CURRENT UCI rule doesn’t make it fair or right,” tweeted Wagner. “And rules can be changed.”

But according to McKinnon, there is nothing inherently unjust about a biological male racing against biological women. In McKinnon’s view, Wagner is instead simply suffering from a bad case of transphobia.

“This is what the double-bind for trans women athletes looks like: when we win, it's because we're transgender and it's unfair; when we lose, no one notices (and it's because we're just not that good anyway),” tweeted McKinnon. “Even when it's the SAME racer. That's what transphobia looks like.”

The ensuing social media backlash against Wagner eventually led her to make an apology, but on Thursday she also assured her followers that she is not backing down when it comes to the controversial issue of men competing in women’s sporting events.

“For those of you who think I have "folded" I have not,” Wagner stated on Twitter. “There's a group of us working on getting the rules changed but we are going to fight it offline, not in the name-calling angry world of social media. I'm choosing to move on in a positive way.”

Rachel McKinnon remains convinced that the championship win was legitimate.

“I think there is absolutely no evidence that I have an unfair advantage,” the professor declared.