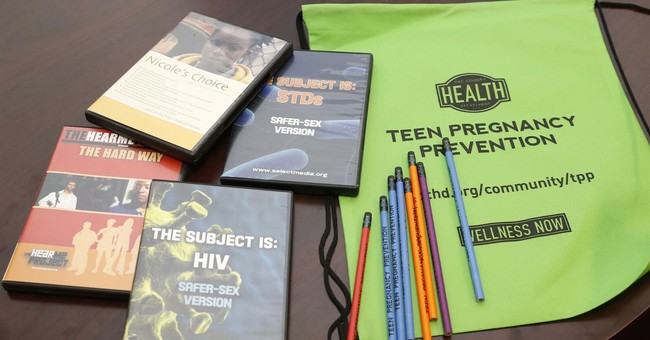 Most parents agree that a high school sex education program ought to include accurate, comprehensive information about healthy teen relationships.

But in Pennsylvania’s Wallingford-Swarthmore School District, that may no longer be the case.

Due to progressive student and staff protests, Drexel Hill’s Amnion Pregnancy Center will no longer be permitted to deliver content to students at Strath Haven High School.

The incident in question occurred last year. And McElroy says that initially, she wasn’t going to do anything about it. But after spending her summer researching crisis pregnancy centers at the Pennsylvania Governor’s School for Global and International Studies, she decided to speak up. While McElroy admits that Amnion did not mention religion once during the class period, she claims they do have Biblical references on their website.

So at July’s school board meeting, the young activist made her case against Amnion by recreating what she alleges was a posterboard used in the pregnancy center’s presentation. Titled “The Slippery Slope of Arousal”, it depicts two stick figures hugging and kissing at the edge of a cliff, before falling onto the rocks--representing sex--below. McElroy also claims that Almion gave students false information about the role of the hormone oxytocin in sexual activity, which is said to promote bonding and positive feelings when released.

According to McElroy, school board members "were horrified – none of them had any idea that this was going on."

The Delaware County district serves roughly 3500 students. After news of the allegations against Amnion came out, more than 500 people signed a Change.org petition against the pregnancy center’s future participation at the school. District Superintendent Lisa Palmer issued a public statement saying that “we will thoroughly investigate.”

Students and parents report that Amnion was invited to make the presentation at Swarthmore by one of the school’s health teachers. The crisis pregnancy center has presented at the school for the past three years, and visits 25 public and private middle and high schools annually, in the greater Philadelphia area.

According to Almion’s executive director Melanie Parks, their organization is not faith-based. Parks also contends that McElroy took the oxytocin remarks out of context, and that Almion’s information “was presented accurately.”

Almion’s website says that their RealEd sex education program is intended “to provide a framework that empowers young people to think through their own values and morals and make healthy decisions about relationships.”

Pennsylvania presently has few standards when it comes to sex education. Teens are required to be instructed in the prevention of STD’s, and abstinence is to be encouraged. It is not uncommon for crisis pregnancy centers to deliver this content to schools.

But if liberal students like Abby McElroy have their way, that may be changing.