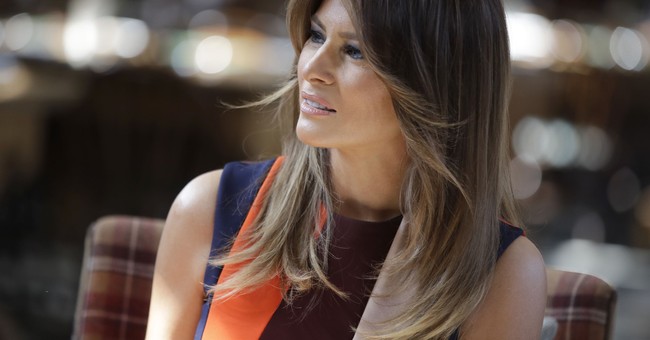 Yesterday, House of Representatives candidate Mark Roberts (an independent running in Oregon’s 22nd congressional district) made news when he compared First Lady Melania Trump to a prostitute on Twitter. Using the hashtags “hoebag” and “think dirty”, he tweeted, “Do you know the First Lady works by the hour?”

The candidate’s strange outburst was apparently in response to Charlie Kirk’s earlier tweet, which had noted that present FLOTUS Melania Trump necessitates only a fraction of the staffers that former first lady Michelle Obama did. Charlie Kirk is president of the conservative organization Turning Point USA.

Today, the FLOTUS is speaking out.

Glamour magazine was the first to report that Stephanie Grisham, spokeswoman for Melania Trump, found Mark Roberts’ tweet to be both “hypocritical” and “disturbing and despicable.” Grisham’s full statement to Glamour reads:

“This is just more hypocritical intolerance from those who oppose her husband’s administration. To say such ugly words about a mother, wife, and our First Lady is not just a pathetic attempt at getting himself in the news; it is disturbing and despicable."

It turns out that Ms. Grisham isn’t the only one who has voiced her disapproval of the tweet.

House Majority Leader Kevin McCarthy, a Republican from California, tweeted Monday night that “this attack on @FLOTUS is disgraceful. Comments like these have no business on any platform. This account should be banned ASAP.”

Both Laura Ingraham of Fox News and Donald Trump, Jr. also tweeted about their displeasure with the attack on FLOTUS, in addition to a number of other Twitter members.

Apparently the founder of Twitter did not agree with their concerns, however. Mark Roberts later tweeted a screenshot of Twitter’s official reply, which indicated that his controversial tweet would not be taken down as it didn’t violate any rules, with the added text “It’s that whole 1st amendment thing.”

On his website, House candidate Roberts refers to himself as a Jewish “independent conservative”. Though not an attorney, he claims to have “read law books”, and is “not a big fan of the exclusiveness and intolerance that’s exhibited by the current Republican Party.”

As for President Trump, Roberts states that he is “not a fan of the Trump administration”, and includes the current president on a list of people he would not be willing to take a selfie with.