Cruz: There's a New Problem with Biden's Media Blackout at the Border 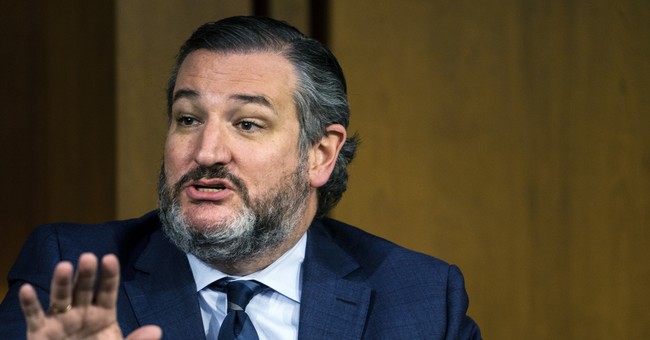 Texas Sen. Ted Cruz (R) on Wednesday slammed the Biden administration's decision to cherry-pick which media outlets were allowed to tour the Carrizo Springs Border Patrol facilities where unaccompanied minors are being housed.

The administration has come under fire for citing the Wuhan coronavirus pandemic as a reason to bar the press from touring Border Patrol facilities. Getty photojournalist John Moore previously sounded the alarm, saying there is "no modern precedent for a full physical ban" on allowing reporters into facilities. Moore – who has photographed Border Patrol facilities under Presidents Bush, Obama, and Trump – shared a lengthy Twitter thread about his experience. He included a few images he was able to capture utilizing long lenses.

Cruz has been outspoken about his disapproval of the administration's media blackout and is leading a delegation to the facilities on Friday.

"Despite your administration's refusal to admit that this is a crisis, the American people are beginning to understand the gravity of the situation. As part of our oversight duties as Senators, I and 14 of my colleagues will travel to the border this week to talk to the brave men and women on the ground who are working every today to stop this crisis and secure our border," Cruz wrote in a letter to the White House earlier this week. "But it is not enough for members of the Senate to see what is happening-the American people must see. That is why I requested that members of the media be allowed to join us. But your administration clearly and emphatically refused to offer press access. This is outrageous and hypocritical."

The senator expressed similar concerns in a Twitter thread.

The White House hand-picked a TV crew to accompany their trip to the Carrizo Springs, NOT the Donna facility.

True transparency would be to open the Donna facility to press that’s at 1,556% capacity when 18 Senators go there Friday.

Reports about the CBP's Donna facility indicate minors are hungry, have only showered once in 7 days, were forced to sleep on the floor, and haven't seen sunlight in days.

Of course the Biden admin isn't allowing cameras in that facility.

The Biden admin is instead taking a camera to HHS's Carrizo Springs facility which The Washington Post reports has a soccer field, basketball court, and "a legal services trailer has the Spanish word 'Bienvenidos,' or welcome, on a banner on its roof."

If the Biden admin was truly committed to being transparent about the crisis on the border, they would grant media access to the Donna facility.

Others agreed with Cruz's assessment, including Texas State Sen. Donna Campbell (R) who said she and five other senators were denied from touring the Border Patrol facility in Donna.

There is ZERO transparency from the Biden Administration. Five of my fellow Texas State Senators and I were also denied access to the Donna facility. Texans will accept nothing less than FULL transparency!

Fox News multimedia reporter Hunter Davis shared her personal experience, saying the press was limited to what and where they could film.

It should be noted that other members of the media that were here were pushed down to a corner of the facility. We were not allowed to stand or film across the street from where a gate enters the facility.

Instead, here was my view. pic.twitter.com/zxpKXTCYjY