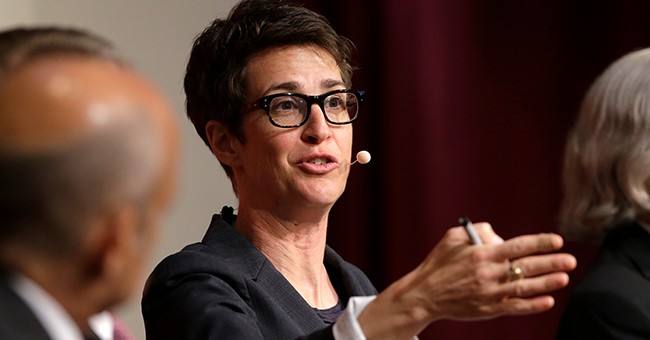 Last week, MSNBC's Rachel Maddow fawned over White House Press Secretary Jen Psaki's press briefings, saying the new spokeswoman is "too nice" on Republicans, specifically because the GOP takes issue with parts of Biden's COVID relief plan. According to Psaki, her briefing style is a way of speaking directly to the American people so they can see what the administration is doing to provide relief.

"The presentation that we are hearing from you in the briefing room already feels – I trust it and it also feels like it's too nice. I feel like the challenges that the administration has on Capitol Hill are more stark than you have been telling us in terms that Republicans are likely going to go along with anything President Biden wants to do. And so, it's not a trust issue, because I believe you are telling the truth, I believe – and I"m going to put it right to you – I believe you are being too nice about what Republicans are likely to do," Maddow said with a laugh. "Do you know something we don't or is that a fair assessment?"

According to the press secretary, she takes her "guidance" from her boss, President Biden, who she says believes in starting out each day with the vision of bipartisanship and working alongside Democrats and Republicans.

"We want to lay this out and speak directly to the people out in the public who are watching the briefing too sometimes, or watching clips of it too sometimes, to really explain to them what they're doing," Psaki explained, specifically in reference to the White House's Wuhan coronavirus relief plan.

"I promise you, I've been in this town long enough, so has President Biden, nobody's naive in the White House about how hard it's going to be or none of us thinks that Republicans are just going to lay down and work with us overnight," she said. "But we feel like we have to try and we have to lay out, for the public, what we're trying to do and that we're trying to work in a bipartisan way."

Psaki said the White House has a "range of tools" to get COVID relief directly to Americans if a compromise can't be met.

.@maddow: "I’m already feeling like the presentation that we are hearing from you in the briefing room already feels — I trust it and I also feel like it’s too nice [about Republicans].”@jrpsaki: GOP “should work with” Biden. "Are Republicans now against reopening schools?" pic.twitter.com/3vXq5TivxQ

The reason people like Maddow love the way Psaki does her briefings is because she's not being asked hard questions. And when she is, she promises to "circle back" with the reporter. Most of the time though, Psaki gets dumb questions, like whether or not Biden will make decorative changes on Air Force One. The White House Press Corps doesn't ask substantial questions or push back on things that are contradictory (like Biden wanting to have 100 million doses of the COVID vaccine handed out in the first 100 days, which was Trump's pace).