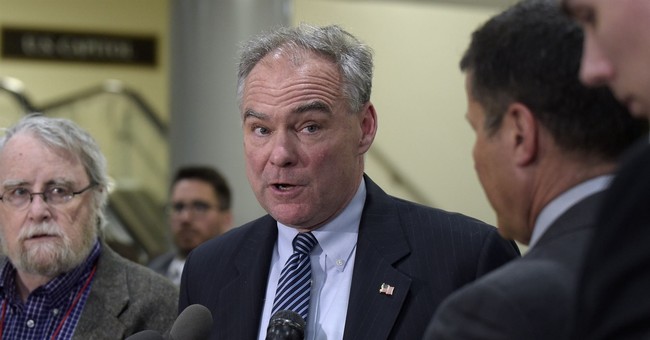 Legal questions have continued to rise over Democrats' impeachment push of former President Donald Trump. The main concern is that a president cannot be impeached once he or she leaves office. Democrats are focused on impeachment because it would bar Trump from running for office ever again. They are now, however, looking at another way of achieving that goal: through the 14th Amendment.

Section 3 of the 14th Amendment allows Congress to limit an elected official from being considered for office if they have taken part in insurrection or rebellion. Democrats have continually said President Trump encouraged his supporters to attack the Capitol on Jan. 6, something they consider an act of insurrection. At least that's what they claim in their article of impeachment.

Here's what that section says:

No person shall be a Senator or Representative in Congress, or elector of President and Vice President, or hold any office, civil or military, under the United States, or under any State, who, having previously taken an oath, as a member of Congress, or as an officer of the United States, or as a member of any State legislature, or as an executive or judicial officer of any State, to support the Constitution of the United States, shall have engaged in insurrection or rebellion against the same, or given aid or comfort to the enemies thereof. But Congress may by a vote of two-thirds of each House, remove such disability.

A handful of Democrats believe they stand on more solid footing if they pursue this avenue.

According to The Hill, the discussions about the 14th Amendment are ongoing and Democratic leaders in the Senate aren't convinced it would actually work.

“It’s an idea that’s out there that I think people are contemplating in the accountability space," Sen. Tim Kaine (D-VA) said. “I just want us to choose a path that maximizes focus on the Biden-Harris agenda."

Senate Judiciary Committee member Richard Blumenthal (D-CT) said applying the 14th Amendment to President Trump was a hypothetical situation at this point, but it definitely fits.

“The remedies of the 14th Amendment certainly may be appropriate for someone who incites an insurrection as Donald Trump did,” Blumenthal said.

Sen. Chris Murphy (D-CT) said the move is on the table, although it is quite early.

“All of these are questions of first impression, in terms of constitutionality,” Murphy said. “I certainly think there is a 14th Amendment avenue separate and aside from impeachment.”

Democrats could move forward with this plan of actual, should they fail to convict Trump during the impeachment trial, which is scheduled to begin in a few weeks. In order to convict, all 50 members of the Democratic Caucus, plus 17 Republicans, would have to vote in favor. It's highly unlikely to happen.

Senate Majority Whip Dick Durbin (IL) said he had a conversation about the move with Kaine but he wasn't convinced it would work unless the Senate voted to convict Trump.

"I haven’t been convinced yet because the 14th Amendment is not explicit on how you determine whether someone participated in an insurrection. ... There is a real serious question if that conviction has not taken place, whether the Congress can have a finding, or the Senate can have a finding, that they’re guilty of insurrection and whether that’s sufficient. So it’s unresolved,” Durbin said.

'Treating the American Public Like Fools': Elon Musk Sounds Off After Biden's Comment About Electric Vehicles
Townhall
Mark Joseph Stern claims he never intended to get Ilya Shapiro fired, because 'the last thing anyone needs is another alleged martyr of cancel culture'
Twitchy
After Bette Midler Puts Down West Virginia for Manchin Vote, the Governor Gives His Dog's Opinion
Redstate
The Morning Briefing: Biden's SCOTUS Pick Will Undoubtedly Be Tragic
PJ Media