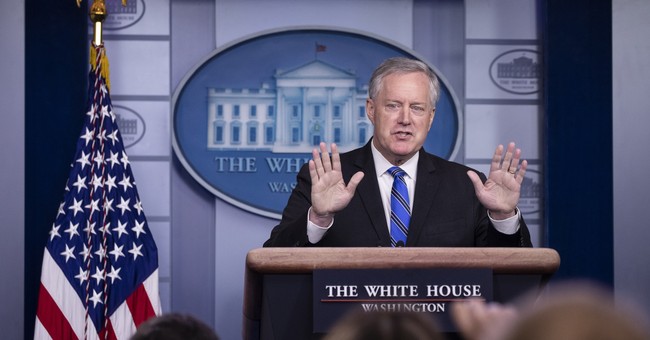 Late Friday night it was revealed that White House Chief of Staff Mark Meadows was diagnosed with the Wuhan coronavirus.

Meadows tested positive for the virus on Wednesday and alerted a close group of advisers, Bloomberg reported. The top White House official reportedly said he has no idea where he contracted the virus.

Meadows was at an election night party on Tuesday, along with the first family. He has come under fire from various left-leaning news outlets for not wearing a mask at the party.

Although the White House has not confirmed the chief of staff's diagnosis, people close to Meadows confirmed his diagnosis to the Daily Caller. One of his closest aides, Cassidy Hutchinson, has also contracted the coronavirus.

According to Bloomberg and the New York Times, one of the Trump campaign's top advisers, Nick Trainer, is also positive for the Wuhan coronavirus.

Meadows, a former congressman from North Carolina, stepped into the role as White House chief of staff since Mick Mulvaney stepped out of the role earlier this year.

When President Donald Trump had the Wuhan coronavirus last month and was hospitalized at Walter Reed Medical Center, Meadows was continually at the president's side.

This is a developing news story and will be updated as more information comes in.