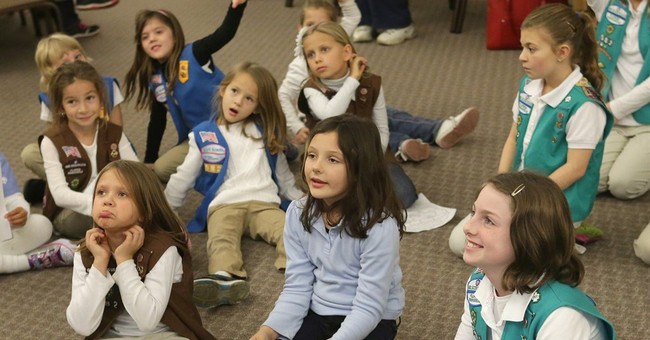 The Girl Scouts of America on Wednesday posted a tweet celebrating the new confirmation of Supreme Court Justice Amy Coney Barrett. The goal of the tweet was simple: to celebrate another woman – only one of five – who has ever sat on the highest court in the land.

It's sad. @girlscouts can't even celebrate another woman being on the Supreme Court without people lashing out. pic.twitter.com/nLoFbZ9ozg

Of course, the rage mob had to go after the young women's organization for celebrating a conservative justice.

Was Barrett a Girl Scout?? If not, why the post, knowing how divisive it is at this moment?? Do you celebrate every new female senator who gets elected, or governor? Sorry but this was weird and tone deaf — Girl Scout mom

This tracks. In June, the Girl Scouts asked me to be in a panel and I pointed out it was entirely white.

They were aware and explained that “history isn’t my wheelhouse.” Welp you found me and two other white women historians soooooo pic.twitter.com/c7lkXPiSPg

And, despite the fact that the Girl Scouts celebrated ALL the women ever on the Supreme Court, some took this to mean that only Barrett was important.

apparently while we were hopped up on thin mints and samoas, the Girl Scouts of America joined the American military-industrial complex pic.twitter.com/a0MLysPunV

At least one blue check mark went so far as to suggest that people boycott the Girl Scouts and instead support the "Radical Monarchs," an organization designed to convert young girls to social justice warriors.

If you’re boycotting Girl Scout cookies and looking to spend your money elsewhere, consider donating to the @RadicalMonarchs. Their multi-year funding grant ran out this spring in the middle of the pandemic, and they need your support. https://t.co/v5xraGizCl pic.twitter.com/s2bDlNkAYD

The Girl Scouts eventually gave in, deleted the tweet and issued an apology, saying they had no intent to be viewed as political or partisan.

Earlier today, we shared a post highlighting the five women who have been appointed to the Supreme Court. It was quickly viewed as a political and partisan statement which was not our intent and we have removed the post.

Girl Scouts of the USA is a nonpolitical, nonpartisan organization. We are neither red nor blue, but Girl Scout GREEN. We are here to lift up girls and women.

Many on the right pointed out that deleting the tweet was political in nature (because the blue check mark feminists started their boycotts).

Then you should have left your non-partisan tweet up...

The @girlscouts are apolitical like Chief Justice Roberts is apolitical.

It wasn't political, but @girlscouts - instead of having the courage of your principles - bowed to the same cohort that says women aren't real women unless they toe the left's line. Not a good look for an organization that is supposed to empower and value all girls. https://t.co/OISTiNjqeu

1) It’s bad/dumb for the Girl Scouts to delete a tweet honoring Amy Coney Barrett. She deserves to be honored.

2) Nope, I’m not telling our neighbors’ daughters that I won’t buy cookies because of a deleted corporate tweet weeks/months ago.

This is how unhinged the modern Left is. You can’t congratulate a woman appointed to SCOTUS without enraging the hate mobs *even* if you include pics of liberal justices. Weak of @girlscouts to give into the mob & delete the tweet. pic.twitter.com/WrRl5g4UJE

So what you’re teaching girls is that they shouldn’t celebrate the accomplishments of women because people on the internet might get tummy aches over it? Got it. Okay. Just reaffirmed my commitment to never support the Girl Scouts — cookies are overrated anyway. https://t.co/NUvmSitPGL

Bullying the Girl Scouts because they decided to applaud the achievements of an accomplished woman in the name of feminism https://t.co/3mHxiLaiY2

As I said on Twitter, the values the Girl Scouts instilled in me were amazing life lessons. They weren't partisan. Obviously, the organization has changed over the years and they now back left-wing causes. When I was in it in elementary and middle school, it was about forming bonds, learning new skills and giving back to your community. Celebrating amazing accomplishments like being the fifth woman ever confirmed to the Supreme Court is a big deal. And it should be celebrated.

The @girlscouts' decision to cower to the cancel culture mob makes me sad. Some of my fondest memories as a kid were my days spent selling cookies outside of the grocery store, learning about new cultures & countries, & give back to my community.

Girl Scouts also taught me the value of celebrating differences as much as we celebrate our commonalities. There should be room for young girls and women of ALL backgrounds and belief systems, not just those on the left.

Pennsylvania School Board Member to Parents: 'I Don't Work for You'
Townhall
'An ABUSIVE FARCE'! Yossi Gestetner DROPS Biden in DAMNING, receipt-filled thread for claiming he will finish the job and shut COVID down
Twitchy
NBC Poll Reveals the Most Unpopular Major Political Figure—and Where Things Are Headed
Redstate
Where the Hell Are the Men?
PJ Media