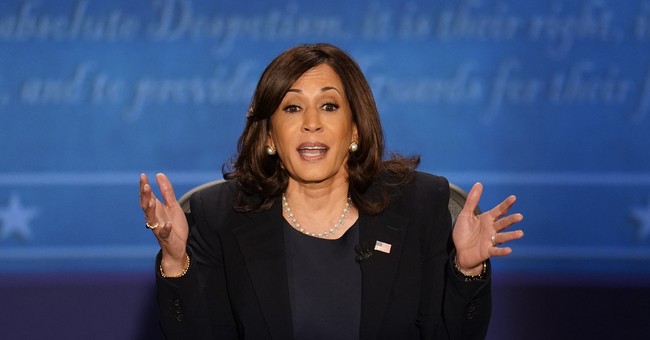 Vice President Mike Pence on Wednesday slammed Sen. Kamala Harris' (D-CA) record on criminal justice reform, both as a District Attorney in San Francisco and as Attorney General of California.

"But you talk about personally prosecuting. I'm glad you brought up your record, senator," Pence said.

"I need to make this point: when you were DA in San Francisco, when you left office, African Americans were 19 times more likely to be prosecuted for minor drug offenses than whites and Hispanics," the vice president explained. "When you were Attorney General of California, you increased the disproportionate incarceration of blacks in California. You did nothing on criminal justice reform in California."

"You didn't lift a finger to pass the FIRST STEP Act on Capitol Hill," Pence said, as Harris smiled and shook her head. "The reality is your record speaks for itself. President Trump and I have fought for criminal justice reform. We've fought for educational choice and opportunities for African Americans ... and we'll do it for four more years."

"You increased the disproportionate incarceration of Blacks in California. You did nothing on criminal justice reform in California." pic.twitter.com/idvR22OnKe

This isn't the first time Harris has pushed her "progressive prosecutor" image. She attempts to play both sides of the aisle – both as a pro-law enforcement, pro-law and order attorney general and as someone who sides with rioters. It's the same image she pushed when she was running for the Democratic nomination. Apparently she didn't learn when the New York Times called her out.

Harris says she wants to run on her record but she's not even consistent on what that record is. Whenever someone tries to pin her down on it she gets defensive and says they're somehow wrong.

Which is it, Kamala? Are you a tough-on-crime prosecutor that locked up a bunch of black people for petty crimes or are you a pro-mob politician? Because you can't be both.