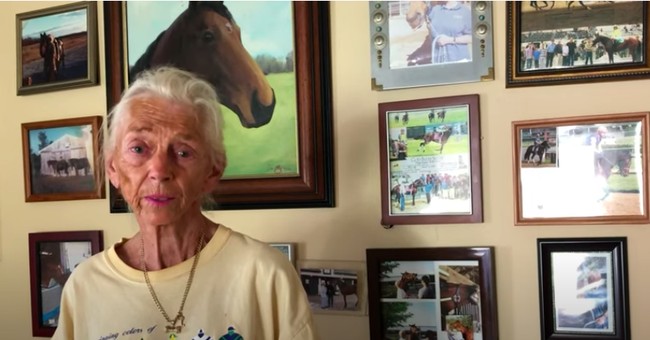 ST. CHARLES, Mich. – Nancy Puffer, 86, has been around horses most of her life. She's owned Thoroughbred horses for decades and one of them, Myhorseofcourse, has been a successful racer. In 2013, Myhorseofcourse (whose barn name is "Puffer") made it all the way to the Belmont Stakes, one of the three final horse races that make up the Triple Crown.

Nancy is now looking at hanging up her reins. She plans to donate her horses to an equine therapy center where children with disabilities are able to ride and care for horses. But before she does that, she has one goal: to get President Donald Trump to ride Myhorseofcourse the next time he has a rally in Michigan.

"He represents the values that I think most people would like to live by: hard work, earn what you get instead of expecting it to come from the top down," Nancy explained. "Life is sort of like a garden. You plant seeds and it depends on what you do. You might get tomatoes and you might get weeds."

According to Nancy, having Trump ride "Puffer" would be something that's not political and could bring people together.

"I think it would touch a lot of people that like horses, something not as political. But, knowing him, he would try anything if he thought it would make other people happy, something different," she explained.

The 86-year-old said Trump wouldn't be the only person in history who rode horses. Specifically, she cited President Ronald Reagan and General George Patton.

But one of the main reasons Nancy wants the president to ride "Puffer" is because of the pun behind the name.