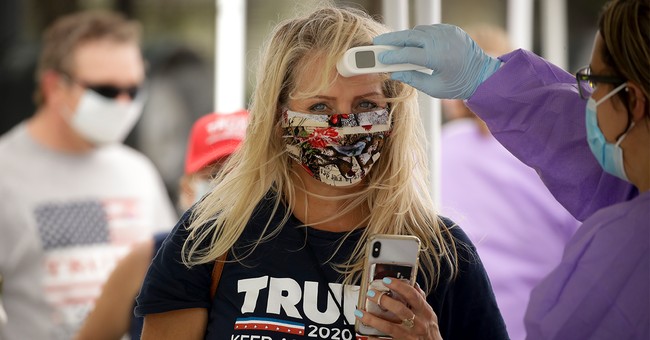 Six Trump campaign staffers in Tulsa, Oklahoma tested positive for the Wuhan coronavirus on Saturday, hours before the president's rally was set to begin. The staffers are part of the campaign's advance staff, the team responsible for making sure events are in order and a schedule is perfected before the candidate arrives.

"Per safety protocols, campaign staff are tested for COVID-19 before events. Six members of the advance team tested positive out of hundreds of tests performed, and quarantine procedures were immediately implemented," Tim Murtaugh, the campaign's communications director, said in a statement.

According to Murtaugh, once the test results came back positive, staffers were immediately quarantined.

"No COVID-positive staffers or anyone in immediate contact will be at today’s rally or near attendees and elected officials," Murtaugh said in a statement before the rally. "As previously announced, all rally attendees are given temperature checks before going through security, at which point they are given wristbands, facemasks and hand sanitizer."

Last week, Bruce Dart, the executive director of the Tulsa health department, warned that the rally could spread the Wuhan coronavirus.

“It’s the perfect storm of potential over-the-top disease transmission,” Bruce Dart, the executive director of the Tulsa Health Department, told The New York Times. “It’s a perfect storm that we can’t afford to have.”

According to NBC News, at least two of the six staffers that turned up positive are members of the Secret Service.