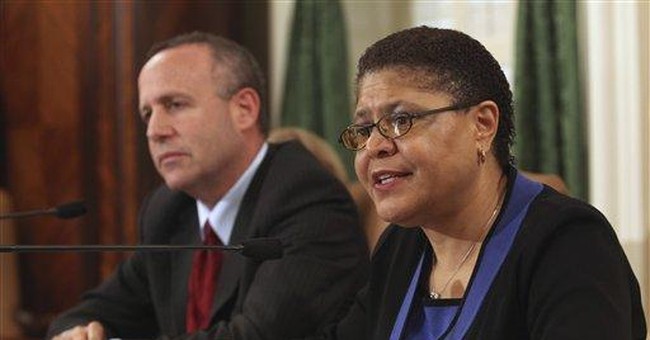 As the "Defund the Police" movement continues to gain steam, the left has continually done what they can to redefine what they want. While defunding the police implies the elimination of police departments, Democrats claim the rallying cry is actually about reallocating funds from law enforcement agencies to other necessary community resources, like mental health counseling and social workers.

Congressional Black Caucus Chairwoman Karen Bass (D-CA) admitted during an interview with The Washington Post on Monday that the movement chose a terrible slogan, the New York Post reported.

“I told some friends that’s probably one of the worst slogans ever,” she said.

“Police officers are the first ones to say they are law enforcement officers, they’re not social workers. What we have done in our country is, we have not invested in health, social and economic problems in communities. We leave the police to pick up the pieces,” Bass explained. “In my city [Los Angeles], for example, on any given night, we have over 40,000 people who are homeless. Why should the police be involved with that?”

Bass was asked whether she believes the George Floyd case and Rayshard Brooks' case had similarities. The congresswoman said she saw key differences, the biggest one being that Brooks “clearly engaged in a fight" with officers and took the one's taser.

Bass then launched into a number of questions that are often cited by the "Defund the Police" movement, like “why were the police involved at all?"

"I mean what he had done is he had fallen asleep in a take-out line. Why did they call the police on him?” she asked.

Apparently Bass takes issue with the movement's slogan but agrees with their sentiment. Otherwise, she wouldn't have asked a dumb question about why the police was called.