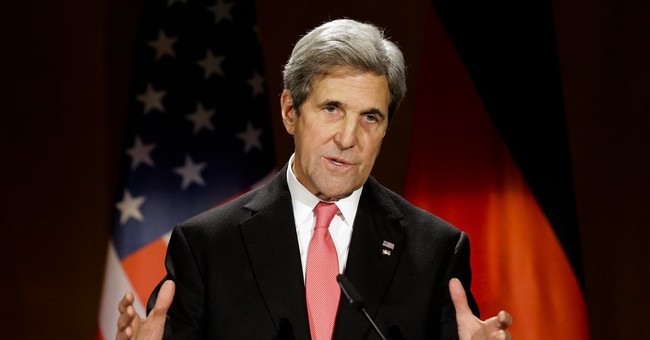 After President Donald Trump ordered an airstrike that killed Iranian Qud's Force General Qasem Soleimani, the White House made it very clear they feel the Obama administration enabled Iran to move forward with nuclear missiles. The reason? The Obama administration gave Iran $1.7 billion in 2016, something former Secretary of State John Kerry sees as "a little bit of money."

"We gave them a little bit of money that was released in that period of time, not as part of the nuclear arrangement," Kerry said during an interview on CNN. "But the fact is the [Islamic Revolutionary Guard Corps] had all the money it wanted. The IRGC wasn't starving at that point in time, and in fact, Iran owed billions upon billions of dollars. Most of that money went to pay off their debts and to facilitate their economic initiatives."

But even when this payment was made back in 2016, Kerry acknowledged that the money that was part of the Iranian Nuclear Deal would probably go to terrorists.

Secretary of State John Kerry acknowledged to CNBC Thursday that some of the money Iran received in sanctions relief would go to groups considered terrorists.

When asked about whether some the $150 billion in sanctions relief to Iran would go to terrorist groups, Kerry reiterated that, after settling debts, Iran would receive closer to $55 billion. He conceded some of that could go to groups considered terrorists, saying there was nothing the U.S. could do to prevent that.

"I think that some of it will end up in the hands of the IRGC or other entities, some of which are labeled terrorists," he said in the interview in Davos, referring to Iran's Revolutionary Guard Corps. "You know, to some degree, I'm not going to sit here and tell you that every component of that can be prevented."

But he added that "right now, we are not seeing the early delivery of funds going to that kind of endeavor at this point in time."

According to the Washington Free Beacon, the payment included "$400 million, plus an additional $1.3 billion in interest from taxpayer funds, ostensibly to settle a dispute over military equipment Iran purchased but never received following the shah's fall in 1979. Critics, however, described the payment as a "ransom" to secure the freedom of American hostages being held by the Tehran regime."

First of all, $1.7 billion isn't just "a little it of money." That's a lot of money, especially when you're handing it over to terrorists. Hell, even giving $1 to a terrorist or a terrorist organization is a dollar too much.

And second, people like Kerry have a lot of nerve talking about how the Trump administration was wrong in killing Soleimani when the previous administration literally gave them taxpayer money to build missiles that can and will be used against Americans.