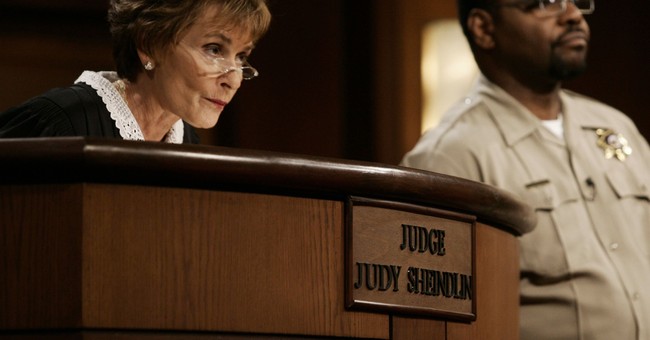 If you're like me, you grew up watching courtroom TV shows. You watched people argue about dog fights, roommate situations and love affairs gone wrong. Judge Judy Sheindlin is, arguably, the most well-known and well-respected judge on TV. She's smart, fair and gets her point across very quickly. In fact, she's known for saying, "We're done here," as soon as she senses any kind of nonsense between the parties in her courtroom. She usually advocates people taking responsibility for themselves and their actions. She's made a name for herself as someone who is tough but fair, which is why it's shocking that on Monday she endorsed former New York City Mayor Michael Bloomberg for president.

"I like to say you can judge someone's character by what they've done. Mike Bloomberg has done amazing things and will be a truly great president," Sheindlin said in her endorsement ad. "No one comes close to Mike Bloomberg's executive achievement, government experience and impactful philanthropy. His steady leadership will unite our country and bring us through these very challenging times."

Bloomberg would definitely not unite the country. In fact, I believe that out of all of the 2020 Democrats, he is the one who is likely to divide us the most. He's one of the largest – if not the actual largest – person funding the gun control movement. If it wasn't for him we wouldn't have Everytown for Gun Safety, Moms Demand Action and everyone's favorite "activist," Shannon Watts. He has continually thrown money at this so-called problem. Instead of working on actual gun safety initiatives, like Project ChildSafe, Bloomberg and his cronies want to punish law-abiding gun owners.

Judge Judy is usually right on the money. Unfortunately, she's totally off on this one.