Giuliani Says He 'Would Testify' in the Democrats' Impeachment Trial 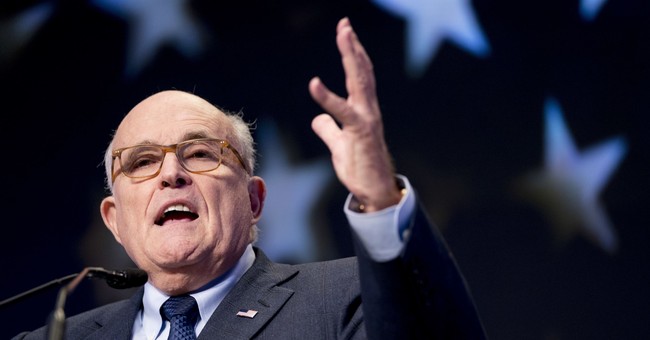 "I would testify. I would do demonstrations, give lectures. I'd give summations," Giuliani told a group of reporters covering Trump's New Year's Eve party at Mar-A-Lago. "Or, I do what I do best, I try the case. I'd love to try the case."

A few of the reporters instantly assumed Giuliani meant he sided with Democrats who believe President Trump committed quid pro quo – also known as bribery – when he asked Ukrainian President Volodymyr Zelensky to investigate former Vice President Joe Biden and his son, Hunter, for corruption. While the veep was handling international relations with Ukraine on behalf of the Obama administration, Hunter was being paid anywhere between $50,000 and $83,000 a month to sit on the board of Burisma, a corrupt oil company, despite having no natural energy experience.

Democrats have said Trump threatened to withhold military aid to Ukraine unless the investigation into Biden – the so-called Democratic frontrunner – took place.

When reporters questioned Giuliani about his statement, Giuliani clarified.

"I don't know if anyone would have the courage to give me the case. If you give me the case I will prosecute it as a racketeering case, which I kind of invented anyways," Giuliani said, referencing his use of racketeering laws to take down mobsters in the 1980s. "So, it's been 30 years ago, but let's see if I can still do it."

Giuliani has previously said he would like to represent the president during the impeachment trial so that he can cross-examine Democrats, NBC News reported.

“I’m great at it. It’s what I do best as a lawyer. That’s what I would be good at,” the president's attorney previously said. “Oh, I would love it, I could rip — you know, I hate to sound like a ridiculously boastful lawyer, but cross-examining them would be, I don’t know, I could’ve done it when I was a second-year assistant U.S. attorney. They’re a bunch of clowns.”

The Democrats' bogus impeachment sham is currently on hold. Although the full House of Representatives voted to impeach President Trump weeks ago, Speaker Nancy Pelosi (D-CA) has yet to send the articles of impeachment to the Senate. She has said she is holding out until Senate Majority Leader Mitch McConnell (R-KY) agrees to what she deems a "fair trial." Democrats want additional witnesses to come before the Senate and testify. Republicans, on the other hand, want a speedy trial and to make their determination based on the case – or lack thereof – the House has established.

McConnell has made it very clear that he will not give in to Pelosi's demands. In fact, he previously told Fox News' Sean Hannity the House has a weak case.

"The president's counsel may or may not decide they want to have witnesses," McConnell said. "The case is so darn weak, coming over from the House. We all know how it's going to end. There's no chance the president is going to be removed from office. My hope is there won't be a single Republican who votes for either of these articles of impeachment and Sean it wouldn't surprise me if we got one or two Democrats."

Giuliani's answer to being asked if he'd testify at the impeachment trial is completely insane pic.twitter.com/8BMjVy4r9A