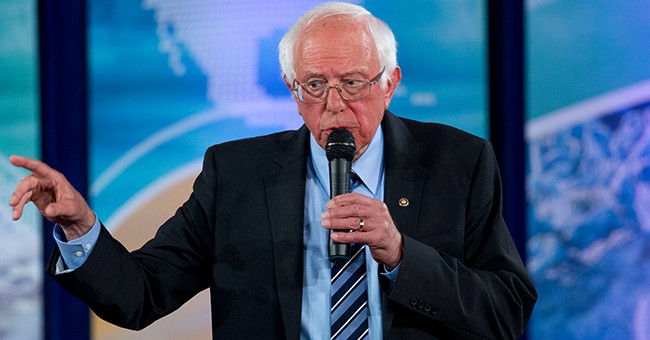 Sen. Bernie Sanders (I-VT) has been one of the strongest supporters and advocates of Medicare for All. After all, he wrote the original bill for the system. While some of the other 2020 Democrats have said they wouldn't raise taxes on average families, Sanders has been upfront and honest that taxes would need to be raised in order to pay for this new system. But he has argued those tax increases would actually cost Americans less in the long run.

Bernie has targeted the wealthy, saying they should "pay their fair share" (whatever that means), but he hasn't been very descriptive about what tax increases would look like if his Medicare for All plan was implemented. During a town hall meeting in Salem, New Hampshire, Sanders laid out the tax proposal associated with his plan.

“What we will do — what we will do is have a four percent tax on income exempting the first $29,000," he told a cheering crowd. "All right, good. You — you’re better at arithmetic than I am. Because what that means is if you are that average family in the middle who makes $60,000 a year, that means we’re going to tax you on $31,000 at four percent.”

There are a few problems with this proposal:

Is the $29,000 exemption for couples then? What is the exemption, if any, for singles? Is it safe to assume that exemption would be $14,500 (half of what he proposed for families)?

Bernie has said this would be a tax increase, so everyone would pay four percent on everything they make over the threshold he established, although that isn't even very clear. Even with that exemption, that raises taxes on the poor and middle class, the very people Sanders has said he aims to protect.

Not only that but this proposal runs counter intuitive to his $15/hour minimum wage proposal. If he wanted everyone to make, at a minimum, $15/hour or $31,200 a year, even the so-called "working poor" would have their taxes increased.

The math doesn't add up, Bernie. And neither do your talking points.