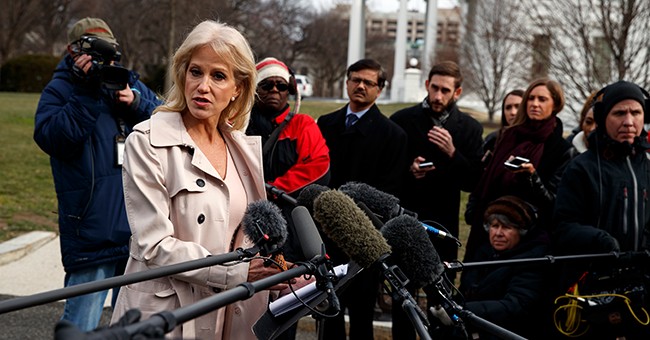 After President Donald Trump on Sunday confirmed the death of Islamic State leader Abu Bakr al-Baghdadi, the Washington Post decided to write a rather sleazy obituary in his remembrance. The so-called "news organization" knew they were in the wrong when they rewrote the headline numerous times after being called out.

Then it was "Abu Bakr al-Baghdadi, Islamic State's 'terrorist-in-chief,' dies at 48."

The Washington Post has now changed its description of ISIS founder Abu Bakr al-Baghdadi from “Terrorist in Chief” to “Austere Religious Scholar” to “Extremist Leader” pic.twitter.com/h899LvZVLX

During an interview with Fox News' Martha MacCallum, Kellyanne Conway, counselor to President Donald Trump, slammed the Washington Post for their obituary blunder. According to Conway, the Post would write a vile and disgusting obituary – the very kind that al-Baghdadi deserves – if he was a member of the Trump administration.

"Look, I just want to say this last thing on behalf of the president of the White House. This obituary was a disgrace and I would ask The Washington Post to close your eyes and pretend that al-Baghdadi worked in the Trump White House and go rewrite the obituary. I bet you would not be as kind."

Conway is onto something. The leftist mainstream media is quick to capitalize on and disgrace members of the Trump administration but the Washington Post can't even call a terrorist exactly what he is... a terrorist. It's sad and rather sickening that this news organization tip toes around the word, as if it's controversial to call this man a terrorist. He kidnapped, raped, killed and beheaded people. And some of those killings were even recorded and broadcasted throughout the world. If that isn't the definition of terrorism, then what is?