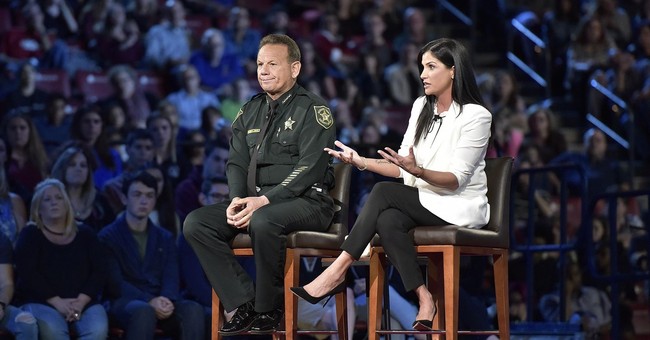 The Florida State Senate on Wednesday decided to permanently remove suspended Broward County Sheriff Scott Israel for his team's failure during the shooting at Marjory Stoneman Douglas High School last February. His deputies failed to go into the high school and engage the gunman while he opened fired on students and staff. Instead, School Resource Officer Scot Peterson hid while the gunman killed 17 and injured 17 more.

Israel was quick to say his ousting was political and a way for Florida Gov. Ron DeSantis (R) to "overturn" the 2016 election results.

"The process they used to steal your vote was a sham and by the Governor's own admission simply 'political.' These politicians in Tallahassee ignored or dismissed the advice of the previous Governor, the commission charged with investigating the Parkland murders, the chair of that commission and even their own judge on the matter," Israel said.

Former National Rifle Association (NRA) spokeswoman Dana Loesch, who took part in a CNN town hall with Israel following the shooting, blasted the former sheriff for his attempt to place blame on others instead of his own leadership.

You're a coward and embarrassment to the badge.
You should call into my radio show — I've got affiliates all over Florida.
I'd love to see you try to blame me again in front of a national audience for your inability to do your job.
Say when. https://t.co/X8LJUeDe6H

The Marjory Stoneman Douglas Commission found the Broward County Sheriff's Office had multiple failures. One of the biggest failures was that Peterson and other RSOs hadn't had active shooter training in two years. Instead of moving forward and attempting to engage the shooter, officers were focused on directing traffic and some, like Peterson, didn't move at all.

Scott's own deputies knew he was a POS and voted accordingly — 85% union vote of no confidence.

Because people like Scott Israel ever wore a badge is why you CANNOT depend on the gov’t to be your protector.

Remember: Law enforcement officials were called 39 times on Nikolas Cruz. He had assaulted his family and friends. He had taken knives and guns to school. And guess what? Law enforcement did absolutely nothing.

Scott Israel is a sham of a human. He blamed me on national television for HIS failure to: properly train HIS deputies, answer repeated calls about the MSD murderer, and refusal to follow up on actionable threats made by the murderer.
Pound sand, Scott. https://t.co/sTiAREu35p

Scott Israel is the epitome of government failure. He wants the title of being sheriff without the commitment or courage to actually be a member of the law enforcement community. Instead of trying to blame supposedly "lax" gun laws on the Parkland shooting, he needs to stand up and admit that his deputies were ill-equipped to deal with an active shooter. The reason so many people are upset with him is because he wants to be a leader but refuses to take the responsibility that comes with being a leader. His team failed, which means he failed. And in this case, failure meant 17 innocent people lost their lives.

Recommended
Flip Flop: DHS Chief Debunks Fake 'Whips' Narrative, Then Abruptly Adopts 'Horrified' WH Posture
Guy Benson
Share this on Facebook
Tweet
'Where Is She?' MSNBC Host Rips Kamala Harris For Being a Miserable Failure on the Border
Matt Vespa
'Asleep at the Switch': Nikki Haley Rebukes Biden's UN Address
Reagan McCarthy
GOP Congresswoman Does What We All Want to Do to a Prius in New Ad
Matt Vespa
HHS Employee Blows the Whistle on Covid-19 Vaccine Adverse Event Reporting