Booker Torches Biden: You Can't Invoke Obama When It Suits You 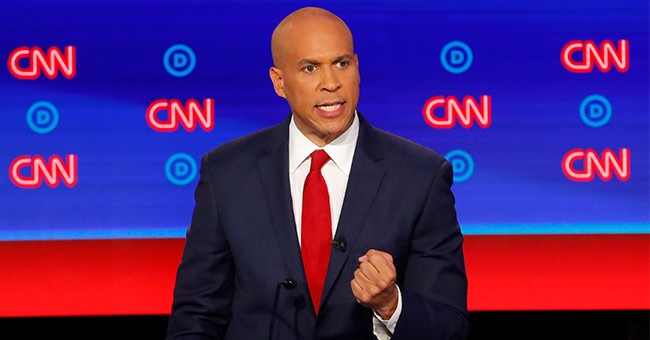 Sen. Cory Booker attacked Joe Biden on Wednesday night for continually relying on his connection to President Barack Obama to carry him through the election cycle.

The comment came after Biden explained how Obama "moved to fundamentally change the [health care] system."

According to Booker, Biden is attempting to play both sides of the Obama card.

"First of all, Mr. Vice President, you can't have it both ways. You invoke President Obama more than anybody in this campaign," Booker said. "You can't do it when it's convenient and then dodge it when it's not."

Cory Booker to Joe Biden: "You invoke President Obama more than anybody in this campaign. You can't do it when it's convenient and then dodge it when it's not." pic.twitter.com/6X5GN8fH1r

Booker is right. Biden really does play the "I was part of the Obama administration" when it suits him. He asked for President Obama not to endorse him because he wanted to earn people's votes himself. But then he repeatedly touts Obama's record...when it looks good for him.

He doesn't like Medicare For All. What does he do? He talks about how President Obama – not him – worked tirelessly to get Obamacare passed.

Obama went through many hurdles to make the Affordable Care Act a reality. What does he do? Insinuate that Obama'a struggles were his struggles.

But when people point out that the Obama administration deported the most illegal aliens ever, Biden hides from the record. Why is that? Because the majority of Democratic voters would be appalled if they knew the truth.

Biden needs to choose: either run as someone who served in the Obama administration but has his own set of ideas or have President Obama endorse him and run on the policy positions he championed.