Parents Sue Gun Makers For Daughter's Death During Vegas Shooting. Their Reason Is Different Than Most. 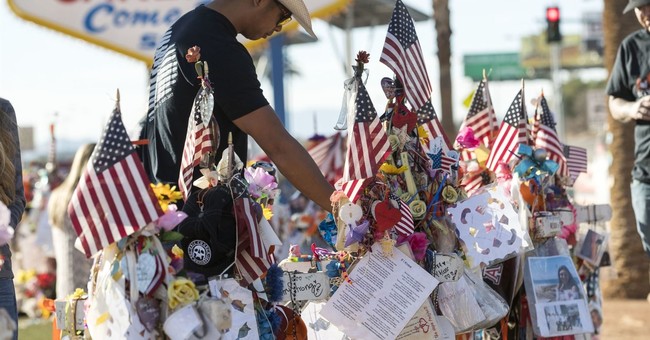 Jim and Ann-Marie Parson are suing 11 gun manufacturers for their daughter's death during the Route 91 Harvest Festival. Their 31-year-old daughter, Carrie, was one of the 58 people killed during the tragic shooting.

Families have sued firearms manufacturers in the past when a loved one dies as a result of a mass shooting. Most of the time, families say gun manufacturers should be held responsible for their loved one's death because the company produced the firearm.

Their primary argument is that the shooter had "illegal" fully automatic firearms because he attached a bump stock to his AR-15. They believe that made the firearm fully automatic, which isn't the case.

The Parsons' legal complaint alleges that, as their daughter tried to escape the concert venue, the shooter "moved through his arsenal, unleashing automatic fire from each of Defendants' AR-15 machine guns."

The document further alleges, "Pursuant to 18 U.S.C 922 it is illegal for any licensed firearm manufacturer to sell or deliver a machine gun to any individual, corporation or company.”

Friedman said the defendants are partially responsible for the deaths of Carrie Parsons and the 57 other Las Vegas victims because “they are co-conspirators. They’ve worked for decades to get automatic weapons, weapons of war, into the hands of civilians, and that makes them culpable.”

Ann-Marie said it's not about taking away people's Second Amendment rights but that it "is about assault weapons, high-capacity magazines.”

This is the first lawsuit stemming from the October 2017 shooting in Las Vegas. Families in Sandy Hook filed lawsuits against Remington, although it has been hotly contested.

It's important to note that bump stocks weren't illegal until the Trump administration moved to outlaw the firearms accessory. The ban went into effect back in March, despite backlash from gun rights activists.

Despite what gun control activists will say, a firearm does not become fully automatic by installing a bump stock. A bump stock uses the natural recoil of a firearm to force the entire weapon back onto the trigger finger, thus recycling the gun as if the trigger was released and reapplied. It's still one bullet per trigger pull, which makes it semi-automatic.