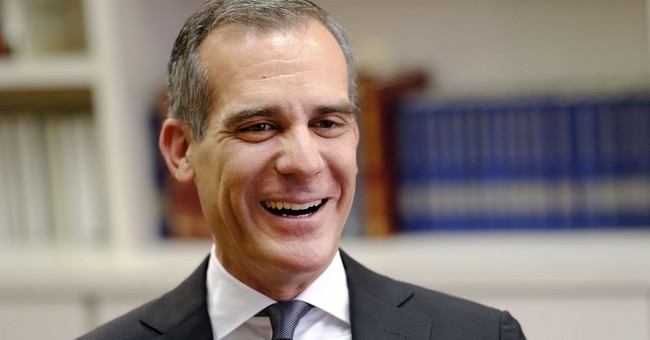 The homeless epidemic has become such a problem in Los Angeles that Mayor Eric Garcetti is facing a recall election over his lack of action. On Wednesday, Republican political commentator Alexandra Datig held a press conference putting Garcetti "on notice" that a recall effort was underway.

A group of Los Angeles residents wants to recall mayor Eric Garcetti. They claim he is ineffective and the homeless population continues to grow. They held a news conference at city hall. #losangeles #lacity #garcetti #homeless pic.twitter.com/HhuYPMCpZB

Under Garcetti's leadership, voters approved a 2016 approved Proposition HHH, which allocated $1.2 billion to build 10,000 housing units for the homeless. As of now, nothing has been built.

Last year, Garcetti announced the city's plans to build 15 shelters for the homeless. Over the last year, however, Los Angeles' homelessness rose by 16 percent, the Los Angeles Times reported.

Datig and her team launched a Change.org petition to gather signatures. The group needs the signatures of over 300,000 registered voters, something that can be costly and time consuming.

"350,000 Signatures needed! - This petition is an effort to gather signatures for a recall effort of the Mayor of the City of Los Angeles, Eric Garcetti. Mayor Garcetti’s inaction and lack of prioritization for the citizens of Los Angeles has caused third-world conditions, with disease breeding devastation on the homeless of Los Angeles who are forced to live in conditions that are a danger to all of the public health," the petition said.

Now that he's facing the possibility of being recalled, Garcetti is finally taking the homelessness issue seriously. On Wednesday, he rolled out his plan through the city's Sanitation and Environment Department.

One of the efforts includes launching comprehensive Cleaning And Rapid Engagement (CARE) teams throughout the area. Instead of relying on residents to call 311 to report trash near homeless campsites,  the teams will use data to determine what areas have the most need and ensure that the hardest-hit areas receive regularly scheduled cleanups and hygiene services.

The number of sanitation teams will be bumped from 20 to 30 and more than $6 billion will be invested in equipment and supplies.

The city will also deploy mobile hygiene units with showers and restrooms. The goal will be to take homeless, train and eventually hire them to help out with clean up efforts, especially around homeless encampments.

“There is no one-size-fits-all approach to solving homelessness. This humanitarian emergency demands strategies that are nimble, targeted, and sensitive to the needs of our homeless neighbors and everyone who calls Los Angeles home,” Garcetti said in a written statement. “Our new CARE teams will help improve public health and strengthen the public good by providing a services-led approach. We want to do more to connect homeless Angelenos with the resources they need, and bring added energy to the work of keeping our neighborhoods clean.”

Garcetti's $6.3 million investment, if approved, would be added to the $26.5 million in existing funds. The new funds will create 47 new sanitation positions, purchase new equipment, and fund overtime pay, which is subject to review by the City Council. If passed, the program would launch in the fall of this year.

As of now, the Change.org petition has a little under 12,000 signatures.