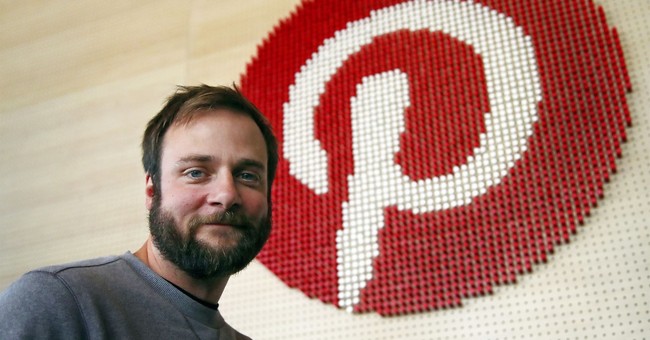 "It has come to our attention that Pinterest contacted a variety of social media platforms, alerting them, falsely, that the news piece constituted 'malicious use' due to 'doxing, dogpiling, brigading, spamming, or scamming.' As a result, Project Veritas witnessed its report disappear on platforms including YouTube," the letter read. "Even third parties simply commenting about the news piece have had their posts censored. Pinterest alleges it is 'concerned about the safety of the identified employees and doxxing.' Because Pinterest is falsely accusing Project Veritas of engaging in reprehensible behavior, we ask that you cease and desist in these efforts, as well as correct earlier misstatements made."

Project Veritas' lawyers laid out the legal groundwork, saying the investigation isn't "doxing," but a matter of public interest.

"In the video report in question, Project Veritas named Megan McClellan as Pinterest's Law Enforcement and Government Operations Program Manager. It did so solely in her professional capacity as an employee of Pinterest. It did not disclose any sensitive personal identifying information about her, like a phone number, home address, personal e-mail or social media handles, or Social Security number. Pinterest's own 'Community Guidelines' goes further than a standard definition of doxing and protects anything that 'identifies and attacks private people. . . .' Nothing in the reported news 'attacks' Ms. McClellan. It does critique and condemn the hidden censorship apparent in Pinterest's operations," the letter read. "Reporting the news---even uncomfortable discoveries like blatant censorship-is not a form of harassment or abuse. It is a protected right under the Constitution, and one we intend to defend."

According to Project Veritas, Pinterest is defaming the organization by falsely telling other social media platforms that the investigative journalists partake in "doxing, dogpiling, brigading, spamming, or scamming."

"Because Pinterest is spreading falsehoods about Project Veritas to third-party publishers and social media platforms, it is engaging in defamation. We request that you: a. Retract. Issue retraction statements to third-party publishers and social media platforms you communicated these falsehoods to within three days. b. Publicly Correct. Publicly correct your misstatement that Project Veritas engaged in 'doxing, dogpiling, brigading, spamming, or scamming' by posting a conspicuous notice on your website within three days," the letter said.

"Should you decide not to retract and correct, please let us know as soon as possible. Project Veritas intends to vigorously pursue any and all legal remedies available to it should you fail to comply with the foregoing demands," the letter said.

Project Veritas reminded Pinterest of one important tidbit: the First Amendment protects the organization's ability to report the news, regardless of how uncomfortable it makes Pinterest.

"The First Amendment has, at its core, the premise that the counter to bad speech is more speech. Disagree with Project Veritas's findings? Publish your own report and reply. Engage the issue. Talk to the public. Do not use the artifice of privacy policies to abuse free speech you disagree with. Your Orwellian tactics curiously black out discussion of this issue, leaving only ignorance in their wake," the letter read. "The considerable precedent protecting journalism in America is about one thing: allowing items of public interest to freely circulate, thus better informing the public. Steps taken to cleverly suppress speech still run afoul of the First Amendment, as the Supreme Court taught in cases like New York Times v. Sullivan or Hustler v. Falwell. Private actors using the law to make free speech impossible still damage First Amendment freedoms. We do not intend to surrender these rights."