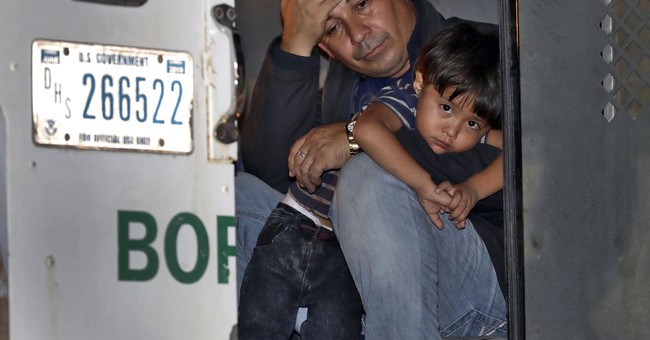 The crisis along America's southern border has continued to exasperate Border Patrol agents in the field and President Donald Trump, who is attempting to put an end to the flood of illegal aliens. Seven illegal aliens from Central American countries are suing the Department of Homeland Security because of overcrowding in Border Patrol facilities and the lack of access to legal representation, The Monitor reported.

The lawsuit was brought about by:

According to the lawsuit, the illegal aliens want themselves, as well as others in the facilities, to be released on bond.

“Petitioners were apprehended in mid-May at or near the U.S. Border with Mexico and subsequently detained. Once apprehended, such persons are often detained for extended periods of time — on information and belief, up to six weeks — in overcrowded holding cells, with inadequate food, water, and sanitation facilities, where attorneys are not allowed to visit. The conditions in these holding cells are dangerous and inhumane,” the lawsuit stated.

The number of illegal aliens flocking to the United States' southern border has overwhelmed Border Patrol resources. Instead of seeking asylum, like they have long touted, illegal aliens, primarily from Central America, now look for a Border Patrol agent, say they want to see an immigration judge and turn themselves in. They do this because they know of catch-and-release. They know the number of people flocking to the southern border has overwhelmed America's immigration system. Border Patrol agents are having to leave the actual border to help process those who have simply walked across the border.

The lawsuit claimed the seven illegal aliens were detained at the Brownsville, Texas facility for more than five days and, during that time period, they were treated inhumanely. One of the biggest issues is the inhumane conditions. Most of the facilities are short-term processing and holding centers, meaning they don't have showers, beds or adequate bathroom facilities. The illegal aliens have now coined the facilities as "hieleras," the Spanish word for freezers, because the facilities are small, concrete facilities with metal benches.

The conditions are something that Border Patrol agents have continually brought up. It was also one of the driving forces behind the immigration crisis in Murrieta, California back in 2014, where illegal aliens were being flown in from Texas and dumped at a short-term drug processing facility.

The lawsuit also stated that detainees were receiving one sandwich a day and haven't showered during their entire incarceration. Some have been held as long as 40 days.

“They have been packed into overcrowded facilities and detained for weeks without adequate food and water, sanitation facilities, or access to counsel,” one lawsuit stated. “Attorneys are not allowed to visit individuals detained at these facilities, so counsel have been unable to communicate directly with them, or obtain their signatures on G-28s, the forms required for counsel to be recognized as their attorneys by DHS.”

The argument being made is that the illegal aliens have failed to receive basic necessities so they've signed away their rights without knowing what exactly it is they're signing.

“Some detainees at these facilities have been so deprived of basic necessities that they have signed documents, the contents of which they are unaware, (but which most likely waive their rights under the Immigration and Nationality Act), involuntarily, and without adequate screening regarding their fears of returning to their native countries and means of learning about potential lawful means of avoiding prompt removal,” the lawsuit stated. “Class members are unable to receive visits from legal counsel, are detained without adequate food, water, sleeping and sanitation facilities, and are often forced or coerced into signing documents, the contents of which they may be unaware, but which may relate to their voluntary departure or removal from the United States."

The attorneys in the case want a federal judge to place an injunction against Border Patrol. If the judge agrees, the federal agency would have to release anyone who has been held more than 72 hours, even if they don't have an electronic monitoring device.

What's taking place isn't being done by choice. America's immigration system is so overwhelmed that ICE and Border Patrol agents literally have no idea what to do with the people. Every month the number of detainees gets higher and higher, with record numbers continually being set and broken. Sadly, this isn't something that's going to be fixed until Congress gets their act together and gets serious about closing America's southern border.

It's time for Congress to put their money where their mouth is. These conditions are spreading communicable diseases. Diseases are spreading rampant amongst the detainees and it's eventually passed onto the agents. And guess what happens? They bring home those exact diseases to their families and their communities. It's why we're seeing measles outbreaks and other disease outbreaks in various parts of the country. This is literally a public health crisis.

Border Patrol agents are doing everything they can to weed out illegal aliens who are sick but they're not properly trained to evaluate for communicable diseases, a whistleblower previously told Townhall. The agents don't have medical training so they're having to guess which aliens are sick and which ones aren't. Illegal aliens who are sick slip through the cracks and are being flown and bussed to other Border Patrol stations throughout the country to be processed. It's why measles, mumps and chicken pox outbreaks are becoming more prevalent. The illegal aliens disperse throughout the United States, agents at other stations get sick, they bring it home to their families and it spreads.