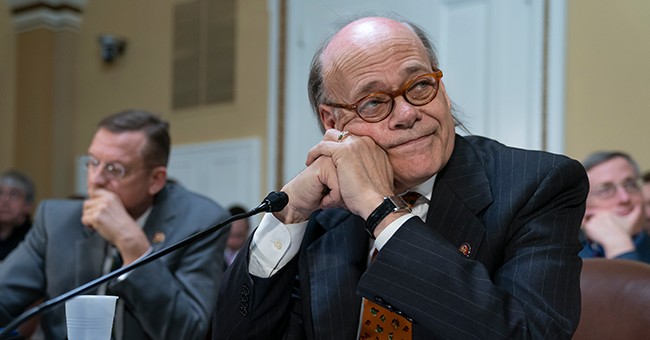 Rep. Steven Cohen (D-TN) on Friday night appeared on CNN's "Anderson Cooper 360." During his interview with Cooper, Cohen called on the Sergeant-At-Arms to drag Attorney General William Barr in before the House Judiciary Committee to testify.

"I have no reason to believe they'll do anything that is in keeping with the traditions of the relationship between the executive and the judicial as co-equal branches of government," Cohen replied. “I think they will stonewall at all costs because they — they know that they can’t give up information and data or the president will be exposed for the type of person and the actions he’s undertaken.”

"So Chairman Jerry Nadler has talked about moving forward with contempt proceedings if he doesn't comply. What would that look like?" Cooper asked.

"So the sergeant-at-arms goes out and forces the attorney general to come?" Cooper asked.

"Yes, because otherwise it is up to the Justice Department. The Justice Department will not do anything to take a contempt citation from us and enforce it against their boss. So you’ve got an impossible situation and it leaves us no other alternative except to use our sergeant-at-arms and to bring him in," Cohen explained.

“When you say bring him in, do you actually support the idea of putting him in — are you talking about just having him sit for a hearing or locking him up somehow?” Cooper asked.

“But do you actually believe that you’re going to — that your committee is going to order the attorney general of the United States be arrested by the sergeant of arms and put in jail?” Cooper asked again.

It's really hard to take someone like Cohen seriously, especially when he shows up to a Committee hearing meeting with a bucket of Kentucky Fried Chicken. Maybe he missed the memo: the majority of his Democratic colleagues have law degrees. Most of them have practiced law in some capacity and others have even taught law school classes.

Why do they need staff counsel to question Barr? Are they incompetent? No. They want to create some unnecessary drama to attempt to take down Barr. You know why? Because he was nominated by Trump and anyone even remotely associated with Trump is seen as a pawn or a bad person. Remember the liberal saying: orange man bad.