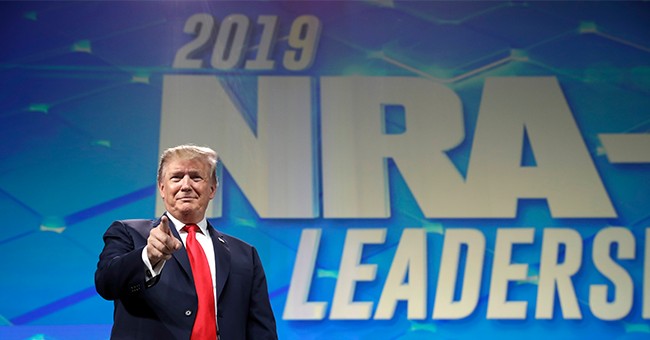 President Donald Trump on Friday addressed attendees at the National Rifle Association's Annual Meeting. During his speech, Trump touted the number of jobs the economy has added, his America First approach and even an end to the UN Arms Trade Treaty.

That saying in itself is a direct testament to the policies the Trump administration has pursued. The White House has worked diligently to roll back red tape, rein in illegal immigration, cut welfare fraud and get the American people standing on their own two feet. Instead of relying on the government to provide every single bit of what we have, Americans are standing up and saying "We trust in God to provide for us."

While we know that God will provide, we also know that there are those who wish to cause us harm. And it's the reason so many of us are fierce defenders of the Second Amendment.

Trump also invited a police officer's wife on stage to tell her personal story about why the Second Amendment is important to her.

"My husband is an officer and works night shift. One night he was at work and my daughter and I were home alone. Someone started banging on the door so hard it broke in two places," the mother recounted. "He demanded that I let him in. I called 911 and went to my room to get the gun. I heard a loud crash and when I came out to the hallway to see he was running towards me with a look in his eyes that I will never forget."

"I shot him twice and held him at gunpoint until the police arrived," she said, as cheers erupted.

"This event was something that changed my life. I've never been more afraid but I am standing strong and have told my story again and again because, with each person I told, they stood a little taller, knowing that if I could protect myself and my family, that they could too," the woman said.

According to the woman, the right to keep and bear arms are the reason she's still alive today. Without the ability to protect her and her daughter, she said she might not be here today.

President @realDonaldTrump invited the wife of a police officer on stage to speak at the NRA convention to tell her powerful story.

"Protecting my family would not be possible without the right to bear arms." pic.twitter.com/QFfNsYlWdR