WATCH: Amy Klobuchar's Answer On Whether Or Not To Impeach Trump Is Rather Odd 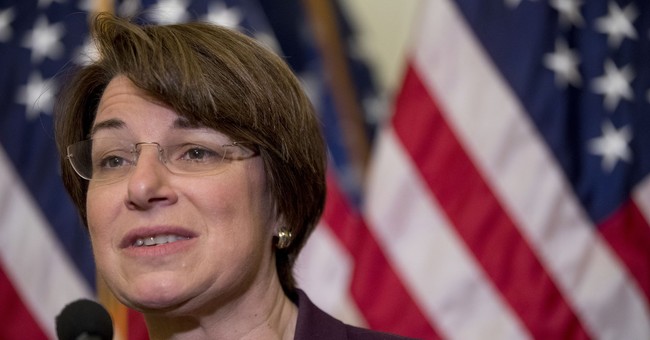 During CNN's Democratic debate with five of the 2020 Democrats, Sen. Amy Klobuchar (MN) received a question about whether or not she would support impeaching President Donald Trump. Pretty much every Democrat has made their position known, saying they'd be willing to move forward with impeachment proceedings. But Klobuchar had a rather different take: she wouldn't say whether or not she would support impeaching the president.

"Do you believe that anything you've read or digested in that report that could have 'impeachable' attached to it?" CNN host Chris Cuomo asked.

"First of all, I believe  I'm the jury here so I'm not going to predispose things. I'm not going to say it is or it isn't. But what I will say is there is very disturbing things that would lead you to believe there's obstruction of justice," Klobuchar replied. "I asked Attorney General Barr these questions. I said, 'Well, if the president or anyone tried to change the testimony of a witness, would you consider that obstruction?' I asked him a serious of questions and I'm really looking forward to asking those questions again because several of them he answered 'yes' and several of them he wouldn't say."

Why is it so hard to say whether or not she believes President Trump should be impeached? Is it because she's not running with the Democratic Party's talking points? Is she afraid of alienating hardcore progressive voters who want Democrats to do anything possible to take down the Trump administration?

Recommended
The Government Isn't Going to Tell You, But We're Going to Run Out of Money in About Three Months
Matt Vespa

Not only that but the "I'm the jury" comment is very, very weird. What does that even mean? This isn't a trial. She shouldn't need to be persuaded one way or another. The Mueller report was released. That is the evidence. Make a determination and let people know where you stand on the issue.