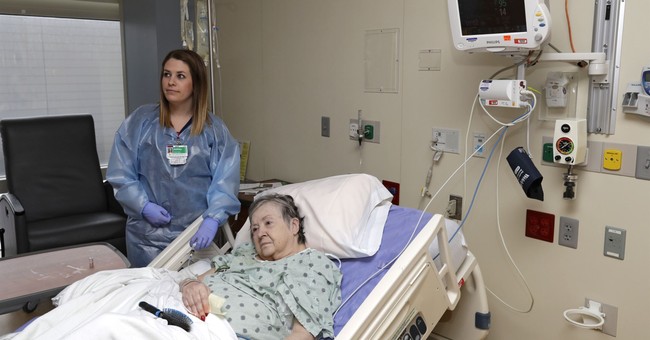 Washington State Sen. Maureen Walsh (R-College Place) has come under fire for saying nurses spend a majority of their shift playing cards. Walsh made the comments during a recent hearing on on SHB 1155, which would require nurses to receive uninterrupted meal and rest breaks and overtime protection, regardless of the hospital's size.

Walsh argued that small, rural hospitals who only serve a handful of residents would be put out of business by the bill.

“I understand… making sure that we have ‘rest breaks’ and things like that. But I also understand that we need to care for patients first and foremost… I would submit to you that those [critical access hospital] nurses probably do get breaks! They probably play cards for a considerable amount of the day!”

Walsh supported an amendment that would exempt smaller, rural hospitals. The Washington State Nurses Association (WSNA) opposed the amendment but it ended up passing.

“No, Senator, nurses are not sitting around playing cards. They are taking care of your neighbors, your family, your community,” WSNA said. “And they do read the research: mandatory overtime is bad for patient care and it’s bad for your rural hospitals. With all due respect, Sen. Walsh: perhaps it’s time for you to put down the cards and pick up the literature.”

“There is zero logic behind an amendment to the rest breaks bill that would cover nurses and patients in some hospitals, while leaving others without any protections,” WSNA told The Spokesman Review.

“Well, if we have an issue with nurses getting tired, let’s quit letting them do 12 hour shifts,” she said. Nurses want the longer shifts “but then they come back and start talking out both sides of their mouth and telling us how tired they are.”

Trust me, nurses haven’t earned the title "most trusted profession" for seventeen years running by "playing cards" on our shifts. WA Sen. Maureen Walsh should be ashamed to use #nurses to score cheap political points like this. #1U #nurseslife pic.twitter.com/ucm89ezpDj

Nurses took to social media to explain their disgust and what they truly do during a working day.

Senator Maureen Walsh... here’s a picture of me “playing cards”

I was scrubbed in a 6 hour open heart surgery a couple days ago. No breaks, no bathroom break... and definitely no game of gin rummy. #nursesplayingcards #wesavelives pic.twitter.com/KO0XfeBYW5

Hey Sen. Maureen Walsh, up for a game of go fish later? ?? There are shifts I barely get a chance to pee. #MedTwitter #girlmedtwitter #Nurses pic.twitter.com/GRSf7z7M0G

Senator Maureen Walsh - Us nurses don't play games. We also don't eat, drink, or pee for 12 hours at a time, because we are too busy saving lives!
#MaureenWalsh #nursesdontplaycards pic.twitter.com/1if8usITHp

A nursing colleague asked, “How many Senators does it take to piss off the nursing profession”? #MAUREENWALSH #NURSESDESERVEABREAK pic.twitter.com/FSJi8NlpUG

Look, I can count the number of times I've agreed with unions on one hand. And this is one of those instances that I'm counting. What Sen. Walsh said was not only rude but absolutely wrong.

My mom has been a chemotherapy RN for more than 30 years. She's spent her time in hospitals, clinics, doing home health and everything in between. I can't tell you the number of times she'd come home with her lunch bag still completely full or how often she'd have to shovel in a bite of food here and there in between patients. Why? Because taking care of her patients, making sure they didn't have allergic reactions to chemo drugs, was far more important to her than taking a break. That and nurses are constantly feeling the pressure of being understaffed. When Obamacare went into effect, our healthcare system really took a nose dive (which we all know). Nurses were forced to take care of more patients than they previously had. Adding more patients and a smaller staff means nurses don't have the option – or luxury – of taking breaks and lunches. It's not only unhealthy for them but it's also unsafe.

Sen. Walsh would benefit from talking to actual nurses instead of getting her information from Grey's Anatomy. Things aren't what they look like on TV.