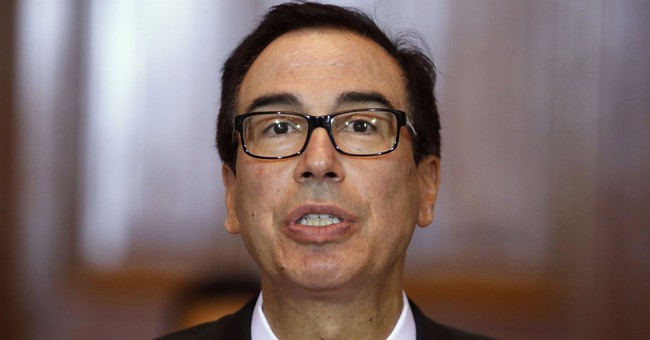 Treasury Secretary Steven Mnuchin on Wednesday sent a letter to the House Ways and Means Committee, saying he would not be able to review the Committee's request for President Donald Trump's tax returns by the April 10th deadline. And part of the reason has to do with whether or not the request is appropriate.

"We begin with an awareness of Congressional concerns already raised regarding this inquiry," Mnuchin wrote. "In the last Congress, the Committee on Ways and Means issued a formal report concerning a House resolution of inquiry seeking information you request. The Committee determined such a request would be 'an abuse of authority' and 'set a dangerous precedent by targeting a single individual's confidential tax returns and associated financial documents for disclosure' for political reasons."

Mnuchin also reminded Chairman Richard Neal of one important tidbit: Neal himself recognized the "unprecedented nature of the request."

According to NBC News, Chairman Neal is consulting with legal counsel. He anticipates a response in the next few days.

When Neal filed his former request with the Treasury Department last week, he was sure the request was proper.

"I am certain we are within our legitimate legislative, legal and oversight rights," Neal said.

According to the Associated Press, "the IRS commissioner is required to provide access to any taxpayer’s returns when directed by the chairmen of the House or Senate tax-writing committees."

President Donald Trump on Wednesday, said he would not release his tax returns while he's under an audit.