WA State AG to Sheriffs: Put Your Political Views Aside And Enforce Our Gun Control Law...Or Else 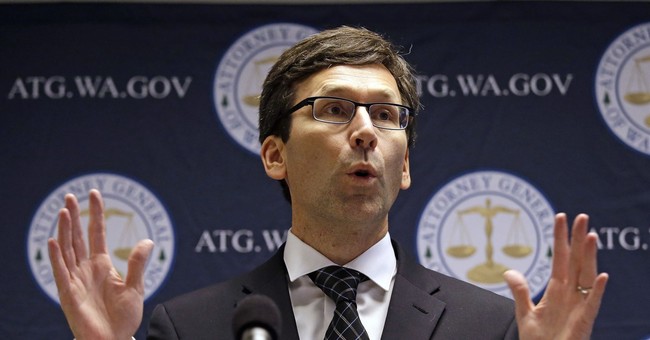 Washington State has been the battleground over gun control, especially over the last year. Back in November, 60 percent of voters passed I-1639, a ballot initiative that:

• Raised the age someone can purchase a rifle to 21.
• Created an "enhanced background check system similar to what is used for handguns."
• Required a person to complete a firearms safety training course.
• Created a common stand for secure gun storage.

Sheriffs across the state refused to enforce the law, saying they believe it violates residents' Second Amendment rights. Spokane Sheriff Ozzie Knezovich even received death threats over his position.

Attorney General Bob Ferguson on Tuesday released a letter he penned to the sheriffs throughout the state, basically telling them they have a legal obligation to enforce the law:

Numerous sheriffs and police chiefs have stated that they will not implement or enforce the initiative. I want to share my thoughts on this important issue, which affects both the safety of our communities and respect for the rule of law.

Like all laws passed by the people of Washington and their representatives, Initiative 1639 is presumed constitutional. No court has ruled that this initiative is unconstitutional.

I will defend Initiative 1639 against any legal challenge. My office defeated the legal challenge to the previous gun safety initiative passed by the people, and I am confident we will defeat any constitutional challenge to Initiative 1639 as well. Local law enforcement officials are entitled to their opinions about the constitutionality of any law, but those personal views do not absolve us of our duty to enforce Washington laws and protect the public.

I am deeply concerned that the failure of local law enforcement to perform Initiative 1639’s background check requirement will jeopardize public safety in our state by allowing the sale of semiautomatic assault rifles to dangerous individuals not lawfully allowed to own a gun. State law provides immunity to local law enforcement officers who run these checks “in good faith.” However, in the event a police chief or sheriff refuses to perform the background check required by Initiative 1639, they could be held liable if there is a sale or transfer of a firearm to a dangerous individual prohibited from possessing a firearm and that individual uses that firearm to do harm. In short, the taxpayers of your city or county assume the financial risk of your decision to impose your personal views over the law.

Outside your legal obligation to perform the background checks, you have discretion, of course, to prioritize your resources. This is a trust placed on you by the Washingtonians you serve. Enforcement discretion, however, cannot subvert the rule of law. All Washingtonians, including those of us in government, are equally subject to the law.

Analogies to marijuana and immigration law enforcement are misplaced. This is not a situation where the federal government is trying to force the state to enforce federal laws. Rather, Initiative 1639 was submitted to the people of Washington and was adopted as state law by nearly 60% of the people. No action by a city council or county commission can change this state law or the responsibilities and duties that the law vests in Washington’s law enforcement agencies.

I am personally deeply opposed to the death penalty, and have maintained reservations about its constitutionality for many years – but my personal feelings about the death penalty did not impact my duties as Attorney General. Last October, our State Supreme Court unanimously ruled in State v. Gregory that Washington’s death penalty was applied in an arbitrary and racially biased manner. Until the Gregory decision, however, my office continued to defend the death sentence in federal courts when death row inmates filed appeals, even after the Governor announced his moratorium. I did this out of respect for the rule of law. At the same time, I proposed legislation to the State Legislature to abolish the death penalty. If you personally disagree with Initiative 1639, seek to change it. Or file a lawsuit challenging it. But do not substitute your personal views over that of the people.

Under Article 1, Section 1 of the Washington State Constitution, “All political power is inherent in the people, and governments derive their just powers from the consent of the governed, and are established to protect and maintain individual rights.” As public officers, our duty is to abide by the will of the people we serve, and implement and enforce the laws they adopt. I encourage you to do so.

What's interesting is Ferguson wants sheriffs to challenge the measure in court if they believe it's unconstitutional. He must have forgotten one important tidbit: the Second Amendment Foundation and the National Rifle Association filed a lawsuit back in November over this very issue.