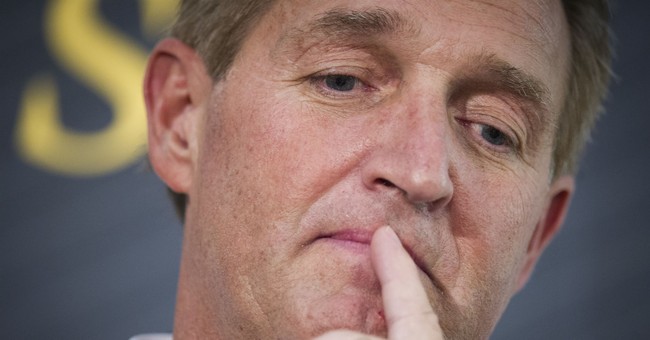 Arizona Sen. Jeff Flake (R) has come under fire for continually working against the conservative movement and the Trump administration. Most notably, Flake vowed to vote against any of Trump's judicial nominations until a vote was brought about to protect the Mueller investigation. Now, Flake has partnered with Sen. Chris Coons (D-DE) to introduce legislation that would tax carbon emissions as a means of combatting climate change.

A similar bill was introduced in the House last month and was the first of its kind in more than a decade.

According to the Washington Examiner, both versions of the bill would impose a $15 per ton of carbon dioxide tax beginning next year. It would rise $10 per year and eventually end up at almost $100 per ton by 2030.

The main difference between the bills? The Senate version allows the EPA to intervene to regulate greenhouse gases if the taxes don't prove to be effective at cutting emissions, The Hill reported. The House version, however, prohibits the feds from regulating greenhouse gas emissions from sectors that are taxed. After 10 years, then the feds can intervene.

All proceeds from the legislation would then be distributed to Americans in the form of a flat monthly rebate.

“With the administration’s recent climate assessment and skeptical response from the president, Republicans need to be at the forefront of addressing climate change,” Flake said in a statement. “Sen. Coons and I have introduced bipartisan, revenue-neutral carbon tax legislation that provides an honest path to clean energy. This free-market solution will reduce carbon pollution and encourage American innovation.”

“Climate change is a serious threat to our economy, our security, and our way of life, and we need leadership from all parts of our society and government to tackle it,” Coons said in a statement. “Putting an economy-wide price on carbon and other greenhouse gases is a comprehensive way to reduce emissions, spur innovation, and create jobs.  I am proud to introduce this legislation with my good friend Jeff Flake, who has long been a champion of market-based climate legislation since his days in the House.  I am hopeful that we will continue to have bipartisan conversations about addressing this issue.”

Flake took to Twitter to express his support for the legislation:

Coons also explained why the tax bill is important to him:

Climate change is a serious threat to our economy, our security, and our way of life.

We need leadership from all parts of our society and government to tackle it.

Today, @JeffFlake and I introduced landmark bipartisan legislation to raise the incomes of the working and middle class by sending all Americans a monthly carbon dividend check.

It will be funded by an economy-wide price on carbon and other GHGs – a comprehensive way to reduce emissions, spur innovation, and create jobs.

Within a decade, our Energy Innovation and Carbon Dividend Act will help to create 2.1 million net new jobs and reduce U.S. carbon dioxide emissions by 33%.