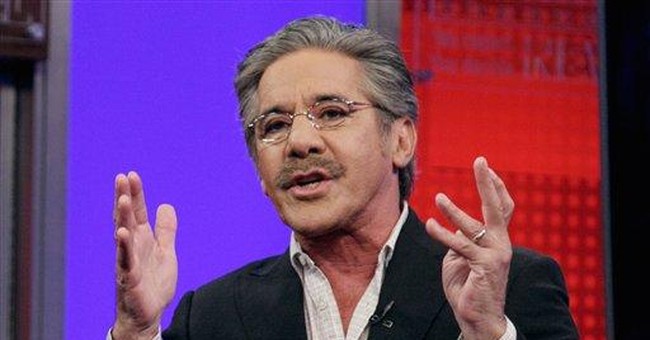 Fox News' Geraldo Rivera got rather emotional on Tuesday's episode of "The Five." Jesse Waters asked Geraldo a simple question: is the media unfairly characterizing what's taking place at the border by showing one image of a woman with a child despite them being surrounded by men. That's when Geraldo lost it.

“This is something that goes to the very quick This goes to my soul. Fulfilling my role as the designated piñata on Fox News, I wanna say I am ashamed. This tear gas choked me," Geraldo said, visibly distraught. "We treat these people — these economic refugees — as if they’re zombies from ‘The Walking Dead.’ I think we arrested 42 people, eight of them were women with children! We have to deal with this problem humanely and with compassion! These are not invaders. Stop using these military analogies. This is absolutely painful to watch!”

Geraldo then reminded viewers of one thing that Lefties frequently use as a talking point: that we're a nation of immigrants.

.@GeraldoRivera slams Trump admin's treatment of migrants and asylum seekers at the border: "I am ashamed. This tear gas choked me ... For goodness’ sake, we suspend our humanity when it comes to this issue, and I fear that it is because they look different than the mainstream.” pic.twitter.com/iJjOnELlwv

The Fox News co-host also took to Twitter to explain his feelings about the issues at the southern border.

The gassing of #MigrantCaravan made me nauseous. Those images may play w the base, but they will also be a scar on our nation's reputation. A hungry, frightened family will not stop trying to get to a better life. No, we can't accommodate all, but we can be humane & compassionate

Both political parties have decided to leave border crisis unresolved. They must get off their asses. 1-build the wall; 2-give amnesty to Dreamers; 3-re-start Bracero-type temporary worker programs; 4-invest in neighboring nations to improve conditions & keep their people home.

1 last thought before I become Designated Piñata on @TheFive. We must stop demonizing desperate economic refugees. We treat them as if they were escaped felons or zombies from the Walking Dead. They are poor people looking for work & a better life. Criminals don't need caravans.

Geraldo seems to be missing one point: we know, for a fact, that there are criminals on the caravan from Central America. Caravan riders admitted it.

Second problem: If we give amnesty to every illegal alien in the country, at what point do we stop? Do we allow everyone in, go back to our immigration policies as normal and then in another 10-20 years we pass another massive amnesty bill? That doesn't solve the issue. That's merely putting a bandaid on a problem.