Avenatti's Lawyer to LAPD: Here's What Happened With Mareli Miniutti During That 'Domestic Violence' Incident 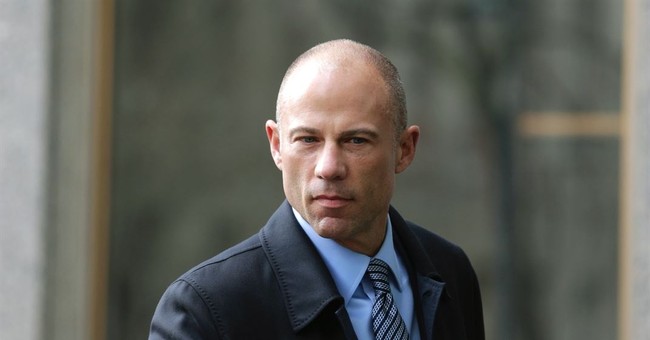 Now that we've heard Miniutti's side of the story, here's Avenatti's.

"Mr. Avenatti did not inflict any corporal injury or cause any traumatic condition,” the letter said.

“Among the footage is a video taken from a security camera in the elevator in which Mr. Avenatti and [his accuser] rode from the twenty-second floor . . . This footage, which was recorded within seconds after the claimed incident, shows the two standing next to each other, without any physical contact for the duration of the ride,” the letter said. “Mr. Avenatti is shown as neither aggressive nor animated. Footage from a security camera in the foyer also shows both parties, again without any physical contact, or even menacing gestures. No physical injuries are evident on [his accuser] . . . not withstanding the fact that her face and neck are visible, as well as other parts of her body. . . . To be clear, the extensive video evidence supports a determination that Mr. Avenatti did nothing wrong and should not be charged.”

According to Vanity Fair, the letter said the security guard at the apartment building repeatedly asked Miniutti if she wanted to call the police but she repeatedly denied.

From Vanity Fair (emphasis mine):

The letter lays out a series of explanations for what Avenatti believes may have led to the incident. Avenatti’s attorney writes that the woman had recently begun taking Myorisan, a generic form of Accutane, a strong acne medication known for its intense side effects, while still using medications prescribed for pain stemming from recent cosmetic surgery. According to the letter, she had spent the earlier part of that evening participating as a dancer in a Snoop Dogg music-video shoot, and socialized with others after it wrapped. The lawyer’s report stipulates that the security guard present said the accuser admitted to drinking that evening. In the lawyer’s letter, he also notes that the security guard said the accuser complained Avenatti was no longer offering financial assistance; the accuser mentioned, according to the letter, that she did not have enough gas money to drive one of Avenatti’s cars earlier that day. “We are concerned about potential animosity because Mr. Avenatti had promised [her] assistance in paying off a credit card debt she has accumulated, but obviously he has not done so in light of the emergency protective order and current events,” the attorney writes.

According to Jenness’s letter, the security guard said that the woman pulled down the side of her yoga pants to reveal a small, reddish mark on her leg, which she said Avenatti had caused. “The claim is a fabrication,” Avenatti’s attorney writes. “If she had a skin rash or similar marks, they were most likely caused by the Myorisan medication, which has serious skin rashes and peeling skin as known side effects . . . or by [her] activity while shooting the music video that day.”

The letter also details a video the woman allegedly posted to her Instagram account on Wednesday evening as part of an Instagram Story, several hours after Avenatti was released on bail. The video purportedly disappeared after 24 hours, as all Instagram Stories do, but Avenatti claims he videotaped the story with a time stamp. He enclosed screenshots of the alleged video, which appear to depict the woman and her friend smiling and posing for the camera while using a filter with pink hearts. “She appears flawless but for possible swelling on her lips from her recent cosmetic surgery,” the letter reads. (Vanity Fair obtained the video, which shows only a tight shot of the woman’s face. It is unclear whether the video was recorded on the evening of the arrest.)

What's interesting is Minuitti is being represented by the Legal Aid Foundation fo Los Angeles, according to the Vanity Fair report. If Minuitti is appearing in music videos, like Avenatti claimed in his letter to the LAPD, she should be making decent money. Or at least enough money to afford her own attorney and not use a free one.

People are circulating the pictures from Minuitti's Instagram account. Anyone who uses social media knows that stories can be posted after-the-fact. We don't know when those photos were taken. If we have a timestamp it'd be of when they were posted, not necessarily when they were taken. How many of us do latergrams where we take a picture and post it severely hours or days after the picture was taken?

Something doesn't add up with this story. Someone is lying. Now the question becomes who's lying and why?