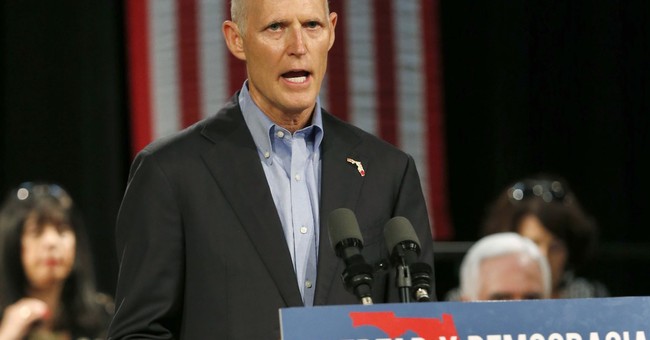 Common Cause and the League of Women Voters of Florida on Monday filed a lawsuit hoping to block Florida Governor Rick Scott (R) from playing a role in the recounting of ballots in the hotly contested Senate race between Scott and Sen. Bill Nelson (D), The Hill reported.

The groups argue that Scott has attempted to intimidate election officials by threatening to involve law enforcement in the recount process.

The groups had previously sent a letter to Scott, urging him to "immediately relinquish authority and remove himself from any control of any person or agency responsible for the processing and counting of ballots from the November 6 general election."

"Removing yourself will help to ensure that there is no appearance of any impropriety, undue influence or conflict of interest in directives being given to election officials," the letter read.

According to the two groups, Scott is in a position to make judgement calls that would benefit him and the Republican Party.

"Being tasked with certifying the results of an election in which one is running for office poses a risk of bias under the best of circumstances,” the groups said in their request for a temporary restraining order. "But Defendant Scott’s efforts to use the authority of his office to advance his campaign and his political party have been extreme.”

Scott previously sued election officials for both Broward and Palm Beach Counties, accusing them of engaging in voter fraud to benefit his opponent, Sen. Bill Nelson.

On Monday, a judge ruled against Scott's request to have Broward County's voting machines impounded because no voter fraud was found.