Dem-Leaning County in Florida Won't Meet the Recount Deadline. Here's What That Means For Voters. 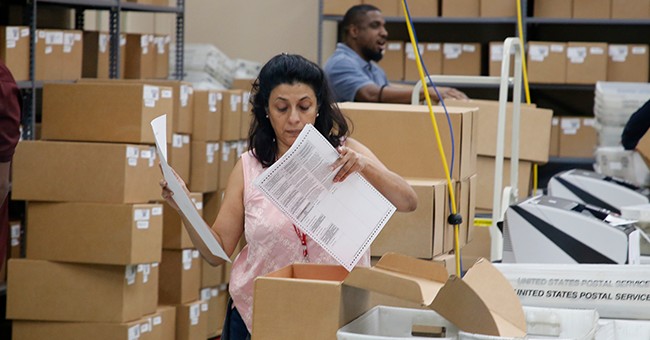 Election officials in Democratic-leaning Palm Beach County, Florida say they won't be able to make the Thursday recount deadline for the state's senate and gubernatorial races, Fox News reported. The county's Elections Supervisor, Susan Bucher, said the reason her department won't be able to finish in time is because of aging equipment.

Here's the catch: Under Florida law, if a county doesn't submit their recounts by the deadline then the votes that are on file are what are counted. The Florida Secretary of State doesn't have the authority to grant an extension.

Bucher spoke hours after the campaign of Republican Senate candidate Rick Scott -- which secured an early legal victory against Democratic-leaning Broward County officials over the weekend -- went back to court with a fresh salvo of emergency complaints against both Broward and Palm Beach counties. One complaint requests that state sheriff's officers "impound and secure all voting machines, tallying devices and ballots when they are not in use until the conclusion of the recount."

In a separate lawsuit, Scott's team is asking a judge to throw out votes tallied by the Broward County Canvassing Board after Saturday's noon deadline, in apparent violation of state law, which requires that "[t]he canvassing board shall submit ... unofficial returns to the Department of State for each federal, statewide, state, or multicounty office or ballot measure no later than ... noon on the fourth day after any general or other election."

Campaigns on both sides of the aisle seem to be pointing the finger at one another.

“The Broward and Palm Beach County Supervisors of Elections has already demonstrated a blatant disregard for Florida’s elections laws, making it more important than ever that we continue to do everything possible to prevent fraud and ensure this recount is operated responsibly," Chris Hartline, a Scott spokesman, said in a statement.

Lets be clear about what we are witnessing in Florida: The sitting Governor is seeking to throw out lawful votes and seize the voting equipment in order to win an election.

"If Rick Scott wanted to make sure every legal ballot is counted, he would not be suing to try and stop voters from having their legal ballot counted as intended," Nelson said in a statement. "He's doing this for the same reason he's been making false and panicked claims about voter fraud -- he's worried that when all the votes are counted he'll lose this election. We will not allow him to undermine the democratic process and will use every legal tool available to protect the rights of Florida voters."

This is just the latest in a string of issues in Florida, including a need for a recount, thousands of ballots suddenly appearing and election fraud.