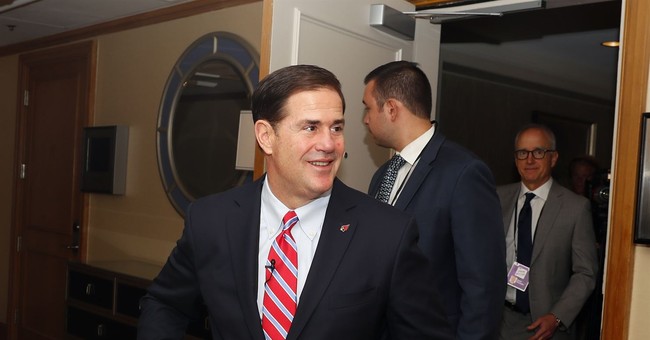 Freshman Republican Gov. Doug Ducey faced challenger David Garcia during the midterm elections. Garcia, an Associate Superintendent of the Arizona Department of Education and research analyst for the Arizona State Senate, focused on an education platform.

Politicians in Arizona have had to deal with the issue of education head-on. The #RedForEd campaign launched this spring when Arizona teachers walked out of the classroom in demand of higher wages.

In response to the walkout, Ducey signed a state budget that included a 19 percent pay raise for teachers over the next three years, AZ Central reported.

Teachers originally supported the Invest in Education Act, which was supposed to appear on the midterm ballot. The State Supreme Court, however, through the initiative out because of its wording, Arizona Sonora News reported.

Arizona’s focus on improving education and wages for teachers has sparked a movement across the country.

Because of his commitment to teachers and swift action, Ducey received an endorsement from The Tucson Daily Star. His endorsement was the first time the newspaper endorsed a Republican for governor in more than two decades.

Governor @DougDucey of Arizona is doing a great job. Doug is strong on Crime, the Border, and our Second Amendment. Loves our Military & our Vets. Vote for Doug, he has my full and Complete Endorsement!

And so did Vice President Mike Pence.

Get out & support @DougDucey for Governor, Arizona! Doug is a proven leader who will put the people of Arizona FIRST & work WITH President @RealDonaldTrump to deliver results to Arizona!

In addition to Trump’s support, Ducey received endorsements from the following newspapers: The Tucson Daily Star, Prescott Daily Carrier, Lake Havasu News-Herald, The Arizona Daily Star, The Casa Grande Dispatch, and The Arizona Republic. Ducey was also endorsed by Cindy McCain, various Arizona county sheriffs, police organizations and chamber of commerce chapters. The most interesting endorsement he received was from Robert Uribe, a Democratic Mayor of Douglas, which sits along the United States-Mexico border.

Doug Ducey wins second term in AZ. @MeghanMcCain on @ABC "thrilled" .. "He's magically a candidate that somehow gets Trump's endorsement and my mother's, so, you know, figure that one out. You know he's just really good for Arizona in a lot of different ways." #AZGOP

Media project Ducey winning with 58 percent of the vote.

He released the following statement after being declared a winner by the Associated Press.

Arizonans have voted, and they have spoken.

I am incredibly humbled by the confidence Arizonans have placed in me and honored to continue working on their behalf.

To everyone who volunteered their time and energy as part of our campaign, thank you from the bottom of my heart. This victory would not be possible with you.

" want to wish David and his family all the best. And I also want to thank Angel Torres for stepping up and bringing his ideas to this race. With the campaign over, it’s time to come together—as we’ve done these last four years—with a renewed focus on moving forward as one Arizona.

We’ve come a long way these last four years, but there’s more to do to grow our economy, improve public education, protect public safety, and expand opportunity for all.

Tonight, we celebrate. Tomorrow, we get to work to continue securing Arizona’s future.