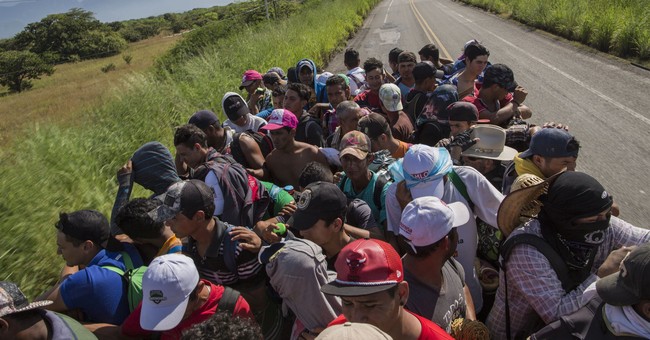 Sunday night, the caravan traveling from Central America to the United States had a stand off with Mexican federal police on a bridge near the Suchiate River, which divides Guatemala and Mexico, the Daily Mail reported. Caravan riders threw rocks and sticks at police. One of the riders died from a head injury although it is unclear how he sustained it.

Since the first caravan crossed the Suchiate River 10 days ago, the Mexican Navy and police have ramped up their patrols along the river. When this group tried to cross into Mexico through the river on Monday but were stopped again by Mexican federal police who insisted they register and show travel documents before entering the country. To make matters even more tense, the illegal aliens created gas bombs out of soda bottles and used PVC pipes to create fireworks to launch at Mexican police.

A 26-year-old caravan rider was killed after being struck with a rubber bullet, something Mexican officials say was not their fault.

At a news conference late Sunday, Mexican Interior Secretary Alfonso Navarrete Prida insisted that his country's forces were not responsible.

He said that Mexican federal police and immigration agents were attacked with rocks, glass bottles and fireworks when migrants broke through a gate on the Mexican side of the border, but that none of the officers were armed with firearms or anything that could fire rubber bullets.

Navarrete said some of the attackers carried guns and firebombs.

While the majority of the caravan rested and reorganized in Tepanatepec, Mexico, a group of a few hundred trekked through the Guatemalan border town of Tecun Uman. They clashed with Mexican federal police who refused to let them into Mexico.

Here are pictures from the scene:

Stunning images of the 2nd caravan of migrants crossing illegally into Mexico pic.twitter.com/kseqdSaaB7

#Pentagon dispatching 5,200 troops to US border with #Mexico