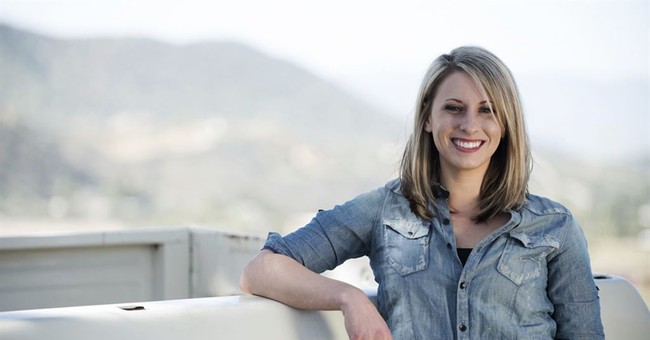 Democrats have targeted select districts throughout the country. Their goal is to flip both the House and the Senate come November. One of the districts they're heavily invested in is California's 25th Congressional District, which is currently represented by Republican Steve Knight.

What's disturbing is her stance on the Second Amendment. Although she says she's a "lifelong gun owners," she wants "sensible" gun laws. And you know what that means: banning particular accessories and types of guns.

As a lifelong gun owner, I am ready to be a sensible voice in the debate around gun violence. I believe that respecting the Second Amendment and advocating for gun safety measures are not mutually exclusive, which is why I am proud to have the distinction as a Gun Sense Candidate from Moms Demand Action. Like we already have in California, I support a federal ban on assault weapons, high capacity magazines and bump stocks, as well as increasing waiting periods, raising the minimum age to purchase all weapons, and expanding our current background check system. These measures can have a significant impact on reducing gun violence, while also adequately retaining the right to bear arms. It’s time to move past inflammatory politics and take steps now to curb gun violence, because protecting our kids and our communities is something we can ALL agree on.

It's important for Californians in this district to vote for King. In fact, Gun Owners of America (GOA) gave Rep. Knight a "B" rating, compared to a "D" rating for Hall. And the National Rifle Association of America's Political Victory Fund (NRA-PVA) gave Knight an "A" rating and endorsed him in the race.

No gun owner in their right might would take a policy position like Hall has. It's typical for anti-gunners to start out their statements with "as a gun owner..." before they say they're in favor of some sort of gun control. It's their way of "easing" what they're trying to say. It's their way of saying, "prepare yourself. I'm going to say what you're doing and what you own should be banned."

Hall wants to ban "assault weapons." We all know that is a term liberals came up with to make guns sound big, bad and scary. A simple feature, like a grip, can make the difference between a gun being legal or illegal.

Banning "high-capacity magazines" is just dumb. You could have a 10-round magazine and you're legal. If you have 11 or more, you're suddenly breaking the law. How did liberals decide on 10 rounds, anyway? Seems like such an arbitrary number.

She wants to increase waiting periods, but haven't mass shootings proved one thing: that anyone who wants to commit carnage is going to do so. Most of these people who carry out these heinous acts have patience. They plan everything down to the last detail. A few more days won't stop them. In fact, waiting periods do nothing but punish law-abiding citizens. It keeps us from defending ourselves and our families. We suffer for the actions of others.

Hall isn't someone who's going to protect our Second Amendment rights. If anything, she's going to push for stricter gun laws across America – and she's admitting it right before our very eyes. Gun rights activists can't turn a blind eye to gun controllers stating exactly what they want to see down the road. They're telling us their plans and we need to make sure we're doing everything in our power to keep their vision from becoming a reality.

Matt Vespa
Multiple Democrats Come Out Against FBI Raid of Mar-a-Lago
Leah Barkoukis
Mother, Daughter Allegedly Aborted, Burned, and Buried a Baby, But That's Not What the Media Focused On