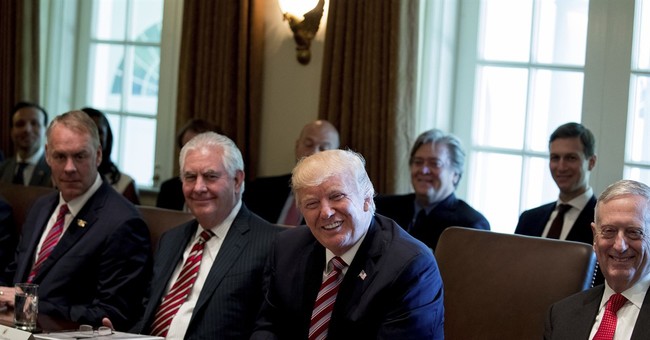 GREAT meeting today with the best staff in the history of the world!!! pic.twitter.com/ocE1xhEAac
— Chuck Schumer (@SenSchumer) June 12, 2017

At the cabinet meeting, the president’s advisors were enthusiastic, saying they were honored to serve with Donald Trump, thanking him for the “opportunity.” Vice President Mike Pence said, “The greatest privilege of my life is to serve as vice president to a president who’s keeping his word to the American people.”

In the recorded meeting posted by CNN, the president is shown silently receiving each compliment, or giving a two or three-worded response to the warm statements.

Senator Schumer’s video on Twitter, recreating the scene with young staffers, shows Schumer in the “role” of Trump, fishing for compliments from each “cabinet member.”

“I wanna thank everybody for coming, I just thought we’d go around the room. Lucy how’d we do on the Sunday show yesterday?”

“Your tone was perfect. You were right on message.”

“Michelle, how’d my hair look coming out of the gym this morning?”

“You have great hair. Nobody has better hair than you.”

She is then interrupted by another staffer—“you know before we go any further, I just wanna say, thank you for the opportunity and blessing to serve your agenda.”

The last sentence, including “agenda,” was very similar to one spoken during the Cabinet meeting, perhaps a poor choice of wording. But Sen. Schumer’s video, which involved young men and women beginning their careers, is forever on the Internet.