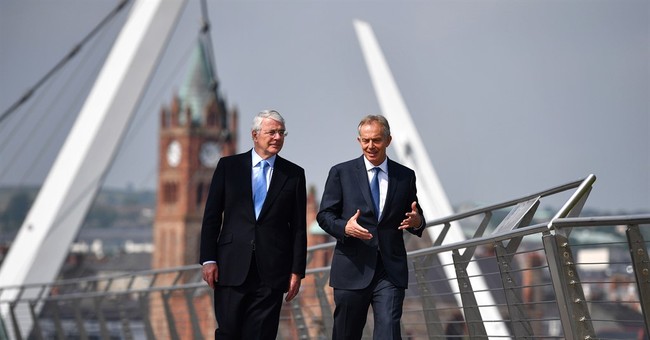 WESTMINSTER, United Kingdom - The campaign for Britain to leave the European Union at the referendum later this month has pulled ahead by 10 points. The latest poll for The Independent newspaper, came after a number of pundits claimed a coalition of conservatives and white working class traditionalists had emerged to take the lead.

The survey of 2,000 people by ORB found that 55 percent believe the UK should leave the EU (up four points since our last poll in April), while 45 percent want it to remain (down four points).

For months most of the polls have shown the two campaigns either neck and neck or with remain slightly ahead. The leaders of every major political party, including the Prime Minister, are backing the remain campaign. Backing also came from a succession of world leaders, including President Obama.

Early this week the pollster Lord Hayward was the first to suggest on the BBC that remain was behind. He claimed the central reason was that the remain campaign had failed to talk to working class voters who usually vote Labour.

The former Conservative MP told the Newsnight programme: "As far as I am concerned the polls are over-estimating how close its going to be, as far as I can see, more and more people are deviating towards leave.

"If you check any demographic, lets say bankers, who should be overwhelmingly favoring in, my information is saying that many in the banking industry are not as solid as people think, the same with Labour."

He continued: "I think the campaign has been male dominated and had very poor messaging. One would expected more women to be much more solid on voting remain because they general vote accruing to pocketbook issues and they are not responding to the campaign. There is no message being received by large members of the community, whether that be the Labour voters or the female voters.

The poll was taken after a series of debates held between various ‘big hitters’ from both camps. In one of the debates for the Spectator Magazine the Conservative MEP, Dan Hannan, said : “Nowhere else in the world do countries apologize for wanting to live under their own laws”.

He went on to point out that while Japan had lost its empire it was not applying to join China and New Zealand was not expected to join Australia because it is a small island off the Australian coast.

He continued: “It is a natural healthy thing for a democracy to live under its own laws while trading and cooperating with every other country in the world.” Hannan also asked how big the UK would need to be to stand alone, given it is the fifth biggest economy and fourth largest military power.

Despite the good news for Vote Leave, the group has not has it all its own way though, remain is ahead among ethnic minorities and in Scotland. The poll also showed most people did not believe Britain would vote to leave, in the past this ‘wisdom of the crowd’ has proved accurate.

Britain pays $500m a week to the European Union in taxes, but the government in Brussels is unelected, leading many Brits to follow the American revolutionary clarion call of ‘no taxation without representation’.

The vote will take place on June 23rd with the results expected in the early hours of the morning after.