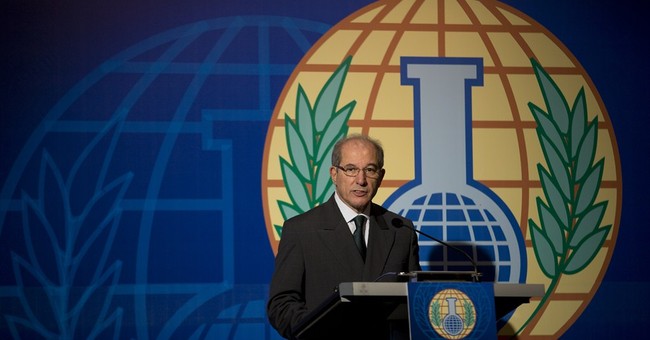 The 2013 Nobel Peace Prize was awarded today to the Organization for the Prohibition of Chemical Weapons (OPCW), the organization currently tasked with destroying chemical weapons in Syria.

“The decision by the Nobel Committee to bestow this year’s Peace Prize on the OPCW is a great honour for our Organisation,” said Director-General Ahmet Uzumcu in a statement released shortly after the award’s announcement. “I truly hope that this award, and the OPCW’s ongoing mission together with the United Nations in Syria, will help broader efforts to achieve peace in that country and end the suffering of its people.”

Established in 1997, the OPCW has been the enforcement mechanism of the Chemical Weapons Convention, facilitating in the destruction of over 80 percent of the world’s known chemical weapons stockpiles.

Although the nature of the organization’s work is indeed dangerous, the mission in Syria is proving to be the most challenging. The Guardian writes:

In terms of disarmament it is one of the world's biggest achievements. Almost a century ago, in the trenches of the first world war, chemical munitions threatened to be the harbingers of an awful future. Saddam Hussein's use of them against Iran and then against Kurdish civilians in Halabja in 1988 were a reminder of their indiscriminate nature, as were the haunting pictures of rows of white-shrouded corpses of children after the attacks in Ghouta, Damascus, in August.

The OPCW mission to Syria is the most dangerous its inspectors have undertaken, as they are operating in the middle of a war zone, but their work has always been perilous. High explosives and nerve agents are a volatile mix. A mustard gas shell exploded in the first operation in Albania, and missiles being cut up in the US have sprayed out nerve agent.

The Pentagon has teamed up with the organization, suggesting its experts use a newly-developed U.S. mobile chemical weapons destruction unit in Syria. Advisors must decide by November 1 which technology will be deployed, and the entire stockpile, estimated to be 1,000 tons, is scheduled to be completely destroyed by June 2014. UN logistics and security personnel and OPCW experts already deployed to Syria have begun visiting and destroying some of the country’s 20 chemical weapons production sites.

While the Nobel Peace Prize highlights and recognizes the importance of the OPCW’s work for peace and global stability, today’s announcement came as a surprise to many whose favorite nominee for 2013 was 16 year-old Malala Yousafzai. Malala is the young educational rights activist who was attacked and shot in the head by Pakistani Taliban on October 9, 2012. Since her recovery, Malala has been an outspoken advocate for educational rights for all children, especially girls, across the globe and has touched the hearts of millions with her conviction for peaceful empowerment.

Malala took the news with graceful dignity, tweeting the following congratulations to the OPCW:

Congratulations @OPCW on winning the #Nobelpeaceprize and your wonderful work for humanity. Honoured to have been nominated @Nobelprize_org

The Pakistani Taliban called the decision "very good news" and praised the committee for "not selecting this immature girl for this famous award," according to a statement by spokesman Shahidullah Shahid.

"If we get another chance, we will definitely kill her and that will make us feel proud," Shahid said.