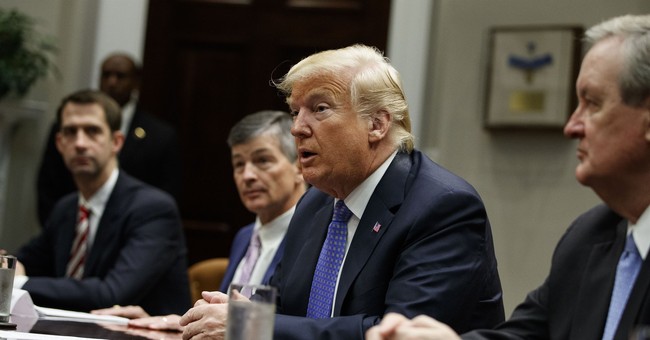 Senator Tom Cotton (R-AR) penned an op-ed arguing that the United States should purchase Greenland. The large island has become the topic of conversation following the news that President Trump has an interest in the U.S. potentially purchasing it.

The legislator wrote in The New York Times that while President Trump’s “critics predictably derided him as crazy,” the reality is that “once again, the president is crazy like a fox.”

America has a long history of negotiating w/ foreign powers to acquire strategically important land. We can do it again by working with our good friends, the Danes and Greenlanders, to acquire Greenland:https://t.co/TzR1Jqz2dH

The idea has previously been considered in U.S. history Sen. Cotton explained, noting that he has even discussed the idea with the Danish Ambassador. He also pointed out that America currently has a military presence in the country:

As far back as 1867, Secretary of State William Seward explored the acquisition of Greenland around the time that he negotiated the purchase of Alaska from the Russians. I myself raised the prospect of acquiring Greenland with the Danish ambassador just last year.

In 1946, the Truman administration offered $100 million to Denmark to acquire Greenland, arguing that the island was “indispensable to the safety of the United States” in confronting the growing Soviet threat, just as it had been in World War II when American forces used bases in Greenland to deter Nazi aggression. While the deal didn’t go through, we kept troops on the island throughout the Cold War. Today, the Air Force’s 21st Space Wing is stationed at Thule Air Base in western Greenland to support our ballistic-missile defenses and space missions.

According to Talk Business & Politics, Sen. Cotton said that he has raised the issue with President Trump:

“I told the president you should buy it as well,” Cotton said, adding later that “He’s (Trump) heard that from me and from some other people as well.”

In his op-ed, the senator noted that China has shown an interest in Greenland. He said the nation “attempted in 2016 to purchase an old American naval base in Greenland, a move the Danish government prevented. Two years later, China was back at it, attempting to build three airports on the island, which failed only after intense lobbying of the Danes by the Trump administration.”

Sen. Cotton said that a U.S. acquisition could benefit the U.S. as well as Denmark and Greenland.

“Greenland’s economy is less than one-tenth of Vermont’s, America’s smallest state economy. Every year, Denmark transfers $670 million in subsidies to support the island,” he wrote.

“As the world’s largest economy, the United States could more easily assume support for Greenland’s communities while investing substantially in its future,” the Senator asserted.

Sen. Cotton noted that there are multiple historical precedents where the U.S. purchased new lands. “More than one-third of America’s territory was purchased from Spain (Florida), France (the Louisiana Purchase), Mexico (the Gadsden Purchase) and Russia (Alaska),” he wrote.