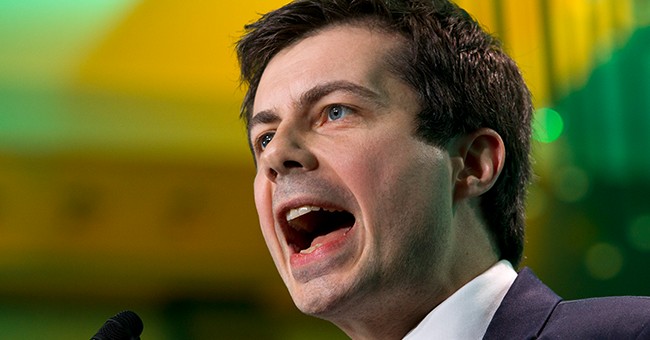 Democrat presidential primary contender Pete Buttigieg said that he does not think President Trump really cares about solving America’s border crisis, arguing that although comprehensive immigration reform could be achieved, “the president needs this to be a problem for his domestic political purposes.” The South Bend, Indiana Mayor also said that believes that some past U.S. Presidents were probably gay.

During the Axios on HBO interview, Buttigieg received a question about whether he would recognize the current situation at the border as a crisis, and while he said that he would acknowledge the crisis, he also assigned a significant share of the blame to President Trump. Here’s the transcript from Axios:

"Axios on HBO": "Do you acknowledge that a hundred thousand migrants crossing the southern border for the second month in a row represents a crisis?"

Pete Buttigieg: "It certainly represents a crisis of largely this administration's making."

"Axios on HBO": "Is President Trump right to ask for more money for barriers and to toughen the vetting of people claiming asylum?"

Pete Buttigieg: "Look, it's worth having a conversation about border security in the context of comprehensive immigration reform, but President Trump is wrong in his approach on this issue, at every point. From the near-term part, which is horrible policies like family separation and also kind of thoughtlessly using U.S. troops as props on the border, to the big picture, which is that this would not be such a problem, if we had stability in Central American countries. And it turns out that immigration is more useful to this president as a crisis unsolved than it would be as an achievement if he actually fixed it. We could fix it. I mean there's enough of a consensus among the American people and even in Washington about the terms of bipartisan comprehensive immigration reform and yet they still can't deliver because the president needs this to be a problem for his domestic political purposes."

"Axios on HBO": "So you're saying the president is using the border crisis to get re-elected."

"Axios on HBO": "You're not saying he's literally making it worse."

Pete Buttigieg: "I don't think he cares if it gets better, but he certainly doesn't benefit from comprehensively fixing the problem. And I wouldn't put it past him to allow it to become worse in order to have it be a more divisive issue, so that he could benefit politically."

As Leah Barkoukis covered earlier today for Townhall, when the interviewer asked Buttigieg how he would respond to the criticism that he’s “too young, too liberal, too gay to be commander in chief,” Buttigieg claimed that there probably have already been gay presidents, though he did not identify anyone specifically.

The interviewer pressed Buttigieg on that point, inquiring, “You believe that we’ve had a gay commander in chief?”

When asked who he believed those presidents were, Buttigieg answered, “My gaydar doesn’t even work that well in the present, let alone retroactively, but one can only assume that’s the case.”