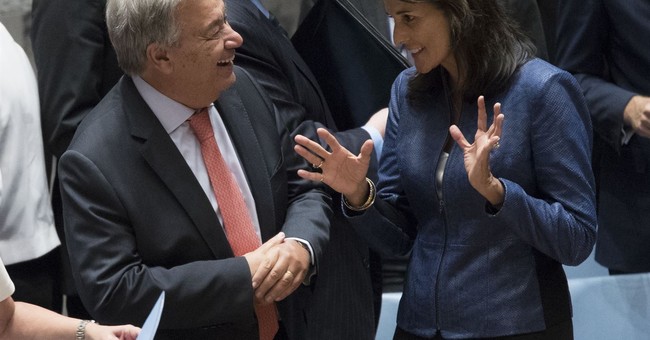 At a recent UN Security Council Meeting she said Venezuelan President Nicolas Maduro and Nicaraguan President Daniel Ortega “are cut from the same corrupt cloth. They are both students of the same failed ideology. And they are both dictators who live in fear of their own people.”

Ortega is guilty of “killing, detaining, and brutalizing anyone who dares to oppose him” Haley noted. Citing figures from the Nicaraguan Association for Human Rights, she said that “over 448 people have been killed” and more than “2,000 have been injured.”

“The Ortega regime has long controlled the media by ensuring that television and radio stations are in the hands of family, friends, and corrupt allies,” Haley noted. And the Nicaraguan ruler installed his wife as Vice President, “banned opposition parties and rigged the Nicaraguan constitution to allow him three uninterrupted five-year terms,” and “is attempting to destroy the most respected institution that is rightfully standing up for the Nicaraguan people: the Catholic Church,” Haley said.

Many have already fled Nicaragua according to Haley: “Over 25,000 Nicaraguans have migrated to Costa Rica since the start of the crisis, with Honduras, Panama, and Mexico also receiving Nicaraguan migrants and asylum seekers.”

Pointing to the evacuations out of Syria and Venezuela into other countries, she warned that a mass exit from Nicaragua would create an influx of people into other countries in the region. “A Nicaraguan exodus would overwhelm its neighbors and create a surge of migrants and asylum seekers in Central America,” she explained.

And in addition to addressing topics like Nicaragua and Syria this week, Haley also addressed the widely discussed New York Times op-ed authored by an anonymous “senior official in the Trump administration.”

He does not shut out his advisers, and he does not demand that everyone agree with him. I can talk to him most any time, and I frequently do. If I disagree with something and believe it is important enough to raise with the president, I do it. And he listens. Sometimes he changes course, sometimes he doesn’t.

Haley’s message to the mysterious writer:

To Mr. or Ms. Anonymous, I say: Step up and help the administration do great things for the country. If you disagree with some policies, make your case directly to the president. If that doesn’t work, and you are truly bothered by the direction of the administration, then resign on principle. There is no shame in that. But do not stay in your position and secretly undermine the president and the rest of our team. It is cowardly, it is anti-democratic, and it is a disservice to our country.