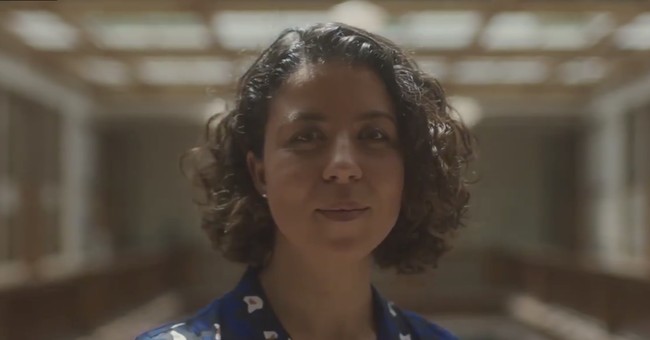 Massachusetts congressional candidate Ihssane Leckey says she wants to "dismantle every oppressive system" in America even though these were the same systems that helped her immigrate to America from Northern Africa and achieve a successful life and career.

Leckey, who is running to fill Rep. Joe Kennedy's seat in Massachusetts's 4th congressional district, says she immigrated to America from Morocco at the age of 20 and was able to become the "first person in her family to graduate from college."

However, in a new ad, she claims that the same country that helped her "start from nothing to become successful" was built on the "suffering of its people."

I came to America with nothing. In 10 years, I went from mopping restaurant floors to taking on the biggest banks on Wall Street.

Now, I’m running for Congress to dismantle every oppressive system that denies us the basic necessities to live.

"We live in the richest country in the world," says Leckey in the ad. "Why do we have to go through this unnecessary suffering?"

She added in the tweet that she wants to "dismantle every oppressive system that denies us the basic necessities to live," calling for radical socialist reform.

Tucker Carlson drew attention to Leckey's hypocrisy on his show, comparing her type of ingratitude to that of Minnesota Rep. Ilhan Omar.

Meet congressional candidate Ihssane Leckey. Born in Morocco to a public school teacher and a farmer, she immigrated to the United States, "believing in the American dream."

Now, Leckey wants to "dismantle every oppressive system that denies us the basic necessities to live." pic.twitter.com/joOMs9anVm

"I came to America, my life improved dramatically, I'm not grateful, in fact, I despise your country so much I want to 'dismantle your systems' that's her platform," said Carlson in response to Leckey.

The congressional candidate is a former Wall Street regulator and a self-described democratic socialist from Brookline.

She's running on issues including taxing the "ultra-wealthy," getting the Green New Deal passed, the Black Lives Matter movement, and Medicare, affordable housing, and pre-K for all.

Leckey is one of nine candidates running for Kennedy's seat. In 2019, Kennedy announced he would not be seeking reelection to the House of Representatives in order to challenge fellow Democrat Ed Markey for a seat in the U.S. Senate.

While it would seem as though progressive squad member Rep. Ayanna Pressley would be quick to embrace a fellow woman on color for Congress, she has decided to endorse her long time friend Jesse Mermell, a white woman who once served as the communications director for former MA Gov. Deval Patrick.

However, the former Wall Street regulator did receive the endorsement of another squad member: Omar. According to Carlson, Omar's popularity is proof that there is a market for Leckey's type of radical socialist ideals.

The 4th congressional district, which covers Brookline to Framingham, has been held by Democrats exclusively for more than 70 years. Perh G. Holmes was the last Republican to serve the district, leaving office in 1947 after losing reelection.

Kennedy has been the district's representative since 2013, succeeding Barney Frank who had held the seat for over 30 years.

The Massachusetts Democratic primary will be held is on September 1. An internal poll shows Leckey neck and neck with her Democratic challengers.