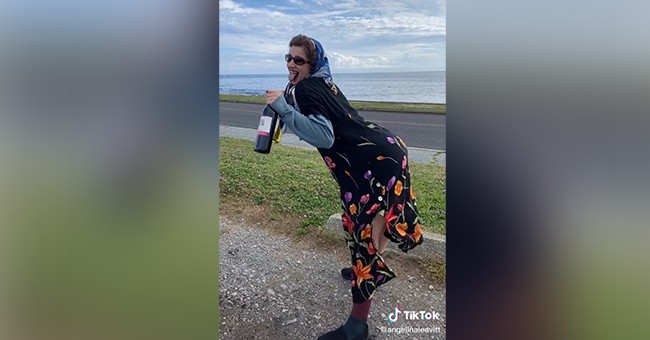 Some creative, young Americans have taken facial coverings to a new level.

Several teenagers have taken advantage of mask mandates and have been visiting liquor stores dressed up like their grandmas in the hopes of scoring alcohol as a new prank on social media.

Countless teens have posted videos on social media of themselves dressed in their grandma's clothes, as well as makeup and wigs to make themselves look older.

In one clip with over 2 million views, a young woman was seen wearing a white wig, glasses, and an old-person Halloween costume mask. She proceeded to enter a 7-Eleven convenience store wearing a headscarf and surgical mask, disguising herself as an elderly woman shopping, and left the shop with celebratory bags of purchased alcohol. The girl, along with her friends then "twerk" in costume, holding cans of Four Loko, a flavored malt liquor popular with teenagers and young adults.

"If everybody keeps doing this they’ll have you taking DNA tests to buy beer," commented one user on the popular video.

Another video showed a girl who appeared to have spray-painted her brown hair slightly gray and wrapped in a scarf while sporting sunglasses in the car. A shot of a liquor shop is then shown and smash cut to the girl with bottles of wine in her lap. That clip also ended with the teen twerking with her prized wine on the roadside.

While some of the teens in the videos put in what seemed to be tremendous effort into their disguises, others appeared to barely change their appearance as they hid their faces behind the mandatory face coverings.

One blonde girl in a video was shown wearing glasses, a headscarf, and elderly women's clothing with a surgical mask, and gloves, walking around a liquor store accompanied by her "granddaughter." She was able to purchase a bottle of vodka and a case of Mike's Hard Lemonade. Close up shots of the girl showed that she was clearly a teen, not an elderly adult.

Some of the teens' videos sparked viewers concerns that cashiers at liquor stores were not properly checking for identification. All states require a photo identification to purchase alcohol, but most cashiers are not trained to ask for age verification from someone they believe to a be over 40 years old. Whether the teens costumes fooled the cashiers or the mandatory mask requirements have skewed the ability to cull underage purchases was not immediately clear.

Some liquor stores began using identification scanning technology that took the guess work out of photo ID verification, a function that totally invalidated the attempt to use a fake or manufactured ID. But presenting the real ID of another, older individual would not have been thwarted by this ability.

Thanks to the antics of a very creative Generation Z, keeping liquor out of the hands of teens in surgical masks could be a big lift. Until age-verification technology is able to spot a costume, store clerks are going to have to be trained to tell a real grandmother from a fake teen granny.